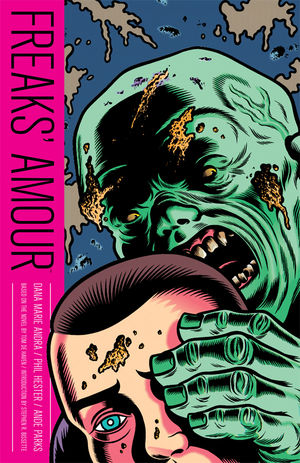 THERE USED TO BE FREAKS

First thing I picked up, and with absolutely no intention of, like, collecting, was that old raggedy blue necktie you can see hanging from the stemware rack. Go take a look. Pretty cool, no?  “Caliban’s Night. 4/18/88. You Shoulda Been There!“ And there’s a tag on the back, turn it over–see? “F.P.A.” Freak Pride Association, man! Freak Pride Association. I’d totally forgot about the F.P.A. Well. It was a long time ago, Tommy.

I got a dozen of those ties now, in different colors, and a bunch of t-shirts, too, big white mushroom clouds stenciled on the front–“What a Difference a Day Makes.” Between the rest rooms, on the wall. See?  I folded it nice and framed it. And check out over here. My little photo gallery–the Blofeld Hole. I love this second one, especially, with the sunset?  Gorgeous, no? Weird and gorgeous.

Oh definitely. Definitely I got stuff I don’t put on display. Not so much I’m worried it’ll get damaged, I just…it might just creep out some customers. Old timers especially might get queasy, or worse, being reminded of certain…things. That happened. Things they might’ve even done. And may regret.

For instance? For instance I got an actual playbill from Carnegie Hall, December two thousand and ten. Now that is rare, my friend!  An actual Freaks’ Amour playbill! I had to shell out a few bucks for that, let me tell you, but worth it. And I got coasters and matchbooks from the Sycorax Club–right, that was over on West Side Avenue, at Jewett–and I got some of those paper bags people used to buy at the door, they’d be all full of dirt and stones and cinders and rock salt. Well, I don’t have to tell you what they were full of, Tommy. Not that you ever personally, or me either….but me and you both knew some people who patronized the Sycorax. Bought that shit and threw it. My old man, for one. I got a gross, and that’s an apt word, a gross of those cocktail napkins that say on em: “Live Freak Shows. Fri, Sat, Sun. Rapes ‘n’ Grilled Sandwiches.” Just the letter N with whatchamacall, an apostrophe in front and back. “Rapes ‘n’ Grilled Sandwiches.” Being cute. I thought one time I might actually use em here at the bar, but then I thought, nah. Make people uncomfortable. What’s past is past. What’s did is done. Nobody much likes to remember.

Yeah, right, nobody except me. Apparently. Else why am I scapping up all this crap, collecting it? It’s a weird hobby, I know it. But swear to God, Tommy, I’m not sentimental. It was our childhood, though. Growing up Normal in Jersey City when there used to be Freaks. So maybe it is nostalgia, a little.

Plus, it’s like, “We had Freaks here, buddy–did you?  What’d you have in your little pissant city? Amish? Big fucking deal.”

Some.  Oh yeah, sure–some, but nothing like twenty-five years ago, Tom, or fifteen, or ten even. Nothing like back before that crazy weather and the Rose Plague, but sure, yeah, there’re still some Freaks living here–little enclaves down Garfield Avenue, up along Ocean around Claremont, Linden, McAdoo. Rose Avenue. Bayside Park. But it’s not like it was. I haven’t heard Greenville called Freaktown in I can’t remember how long. But long. It’s way different now. So different that when you see a Freak? Riding the Light Rail or shopping at Journal Square? You hardly notice. Once in a while, a Freak’ll even stop in here for a quick beer and it’s all, “Hey, how you doing?” “Can’t complain, how about you?”

Bad shit happened, definitely–I’m not denying it, but it’s all in the past. It’s over, Tom. It’s history.  And we survived.

Caliban’s Night was almost forty years ago–you believe it? Next April. Forty years! So you got, like, the natural course of events: people get old and they die, and Freaks, much as we used to think otherwise, are just the same as the rest of us, so far as that goes. But for a lot of Freaks–well, there were some pretty nasty cancers. You remember Dinah Murphy? That’s her in that picture behind you. With the four boobs, correct. She was one Freak none of us minded seeing on the street! Double-rack Dinah, we called her, us dumbass kids. Anyhow, she must’ve had twenty operations, and none of them helped. She died last winter. So yeah, a bunch of Freaks bought it long before their time on account of various new versions of the Big C. And of course, plenty of them got–“reupholstered.” Head to toe with that synthetic skin. Some of them stuck around afterwards, others drifted away. Most did, I suppose. It’s not Freaktown anymore. That’s for sure. But it’s still Jersey City, Tom. It’s still our hometown.

‘Nother Corona?  Excellent!  And this one’s on the house. Good to see you again, man!  And listen. I’m sorry about your mom. I didn’t realize she still lived in the neighborhood. Never seen her around.  And she was not the kind of woman’d patronize the Ocean Taproom! Too classy for a joint like this, she was, not that I’m not proud of the place, you understand.  Even if it’s not exactly–whatever. Six deep at the bar. Which reminds me, I ought to go check on those deadbeats schmoozing in the booth. See if they need anything. Be right back, Tommy…

…Eleven years. I’ve been at the stick here going on eleven years, but during the worst of those Hellstorms I had to shut down for a while. Bought the business from Jack Soglow, remember Jack? Right! Freak with that lemony goo always dripping from his eyes. How we used to make fun of the poor bastard when we were teenagers! I just–I cringe, Tom. Thinking of the cruel shit we pulled. Why’d we do it? Why did we act that way?  It could’ve happened to any one of us, any single one of us could’ve, you know, changed. You shoulda been there? We were! You, me, our families, we were all here too on Caliban’s Night. We were just lucky, that’s all. But still we acted like. We acted like royal shits.

Jack Soglow. Sad guy. Huge chip on his shoulder, but he was all right. Sold me this place for a song. Oh, he passed long ago. He, uh. I heard he committed suicide.

But Tommy. Let me ask you something. You heading straight back to Virginia after the funeral or you plan to stick around for a while? Yeah? So maybe we can take a drive up the Heights, you can’t go home without seeing Blofeld Street again. Of course the Hole’s still there, fool, and it still looks the same, too. It’s all fenced off, it’s on the National Register, I’m not kidding you. They even got plaques. It’s famous. We’re famous.

Okay, that’s settled, we’ll run on up there together–day after tomorrow?

You won’t believe it, Tom–they built all these high rises around the rim. Very swank. That fat loudmouthed guy, was governor of New Jersey? Owns an apartment in one of them. CEOs, hedge fund types. All living in splendor with unobstructed views of the Blofeld Hole. Lappa luxury! If I could afford to, I’d move up there in a second. Believe it.

So we’ll go, it’ll be great. You’ll take pictures, show your kids. You got kids, Tom? That’s fantastic.  How old? Well, I bet you earn major Dad Points, coming from Jersey City. Growing up here when there were Freaks roaming the neighborhood. Nah.  Not me. And no regrets. Yeah, still on Bartholdi. Still living in the same place, same as always, what the hell. It suits me. Well, I exaggerate. It’s all right, I guess, but it would suit me a whole lot more if I had few less neighbors of the Nigerian persuasion. What’re you going do, though?

Yeah!  You too, Tommy, and don’t forget: we got ourselves a date with the Blofeld Hole.  I’ll call you. And before you go, this is for you. No, I insist. With my compliments. Is Large good, or do you wear Extra Large?  You’re very welcome, man. Enjoy. “What a Difference a Day Makes.” Say that again!

Hey–Tom! Tom! Hold up. You staying at your mom’s house while you’re here?  Yeah, I figured.  But you’re not walking there now, are you? Oh good. Good. No, but you just–you gotta be careful. Stay alert. You can’t spit in this neighborhood now without hitting some pissed-off Muslim in a fucking skullcap, some fucking gorilla from Haiti or Surinam, Afghanistan, Piece-o-crap-istan, you name it, we got em.

Yeah, you too, buddy. Good night.

For Steve Bissette and Gary Panter, with friendship and thanks