One hundred years ago this month, refinery workers at the Standard Oil plant in Bayonne, New Jersey, almost all of them Polish immigrants, walked off their jobs. These “aliens,” as the New York Times called them in headlines, were demanding more money, naturally, but also, and just as important to the strikers, an end to the physical and verbal intimidation, and relentless ethnic insults, of their foremen. 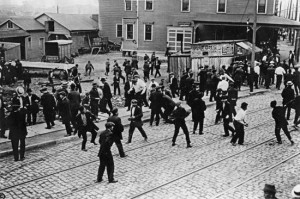 The majority of unskilled and semi-skilled employees worked a 6-day, 84-hour week. Pay was about $2.50 a day. They weren’t unionized—representatives from the A.F.L. and the I.W.W. showed up only after all hell had broken loose—and despite the company’s predictable cry of “professional agitators,” this almost certainly was a case of spontaneous combustion. Because of speeded-up production generated by the war in Europe, the Bayonne plant’s earnings that year stood to exceed the previous year’s by at least three million dollars. But when the still cleaners (who worked in temperatures that could reach 200 degrees) asked for a raise of 15%, and the coopers for a raise of 11%, both requests were denied. They struck first, and then everyone else followed.

Less than an hour after General Manager George B. Gifford, had the gates locked at 7 o’clock on the hot, clammy morning of July 20, 1915, the first riot broke out in front of the Standard’s stockade wall. Hundreds of strikers and their wives winged stones at city police who’d arrived there in force. Inspector Daniel Cady, directing his officers from a buggy, was knocked to the street by a cobblestone. A young patrolman at the buggy’s reins was hit in the neck with half a brick and followed Cady down.

The violence escalated after workers at two neighboring plants, the Tidewater and Vacuum Oil companies, joined the strike. Local Italians were hired on as replacement workers, and armed mercenaries from New York City came over on barges. Bayonne’s mayor Pierre Garvin, a salaried attorney for Standard Oil, had urged the company to engage the services of strikebreaker Pearl L. Bergoff, whose offices were on Liberty Street in Manhattan, but whose residence was in Bayonne.

Bergoff had built a mansion there in 1909, converted to Catholicism to further his standing among the city’s Irish-American political elite, and dabbled in Hudson County real estate whenever he wasn’t away leading small and large armies of thugs against striking coal miners and stevedores, street-car conductors, railway workers, clock-makers, you name it. He liked being called “General.” Newspapers, however, dubbed him the “Red Demon,” because of the bright-red hair he usually kept covered under a jet-black derby, and because of his malevolence as a “labor adjustor.” Before the refinery strike, he’d broken only one previous strike in Bayonne, at a small hat-making company.

When Bergoff had gone to the refinery for instructions, Gifford advised him the Standard had no intention of giving in. “Get me two hundred and fifty men who can swing clubs,” he said. “If they’re not enough, get a thousand, or two thousand. I want them to march…through the guts of Polacks.” Not a problem. For a fee of $200,000, Bergoff could do that, and more.

For nearly a week, his men, recruited from barrooms and gangster hangouts, parole offices, even insane asylums, terrorized the strikers, sniping down at them from the walls, firing into nearby clapboard tenements where many of them lived, and regularly surging out from the plant’s side entrances with clubs and pistols and Remington rifles. Five workers were shot and killed by mercenaries, company guards, or the Bayonne police, including an 18-year-old boy. Dozens more were wounded by gunfire. The Times kept score, listing the names of the injured followed by the cause of injury:  shot in the arm, shot in the knee, shot in the wrist, shot in the leg, shot in the thigh and abdomen…

The strikers fought back, arming themselves with cheap pistols and blackjacks, blocking the streets with railroad ties and water-main pipes, and burning down a gate house at the Tidewater works. They isolated guards and beat them. They chased one into a nearby swamp, where he saved himself only by burrowing into a 50-foot hill of cinders, and trapped a dozen others in a city fire station. They lobbed burning torches over the plant walls, and accomplished sabotage inside, cutting feed lines and setting them on fire in a yard with 40 huge tanks full of naphtha, kerosene and gasoline.

All and all, it was a standoff. Till the sheriff rode in.

Prior to being elected Sheriff of Hudson County, Eugene F. Kinkead had served one term as a Democratic representative in Congress. Wavy-haired and handsome, he was an impressive, animated speaker with a talent for theatrics, which he exploited, in ways both legal and illegal, from the moment he arrived at the strike zone.

After deputizing 75 citizens of Bayonne, he posted some at the “dead line” he drew outside of the refineries, and dispatched others to patrol the streets, all with stiff cards tucked into their hatbands that read “SHERIFF’S AID/For the Protection of Life and Property.” He insisted his deputies bow their heads noticeably and make the sign of the cross whenever they walked past Our Lady of Mount Carmel church, where most of the strikers attended Mass. And in view of all, Kinkead personally arrested over a dozen mercenaries and Standard guards for appearing  outside of the plant gates armed with pistols and clubs.

Tearing off his jacket and necktie, he addressed the strikers in his shirtsleeves, once from his open car, several times at strike headquarters in nearby Mydosch Hall. “I told them they were Poles and had suffered much at the hands of Russia, and that I was an Irishman and my people had suffered at the hands of England.” He mentioned their common Catholicism, his pro-labor reputation, and then accompanied the strike committee to a meeting he’d arranged with Gifford and General Superintendent George Hennessey at the Standard works.

But Gifford and Hennessey refused to “treat” with the men until after they’d returned to work, and the strike continued. So did the violence. Kinkead had a close call himself. While chasing away a group of teenage boys who’d come by to watch a riot, he noticed a company guard on the Standard’s wall aiming a rifle at him. Kinkead ducked, and a striker standing beside him was shot and killed.

After Governor Sadler turned down his request for state militia, Sheriff Kinkead comported himself during the last days of the strike like a dime-novel Wild West lawman. Taking along deputies and Bayonne police officers, he barged into the Standard and Tidewater plants and arrested scores of guards and mercenaries, including Pearl Bergoff. Loudly denouncing them as “paid assassins in the employ of big business,” he made certain the strikers watched as they all were pushed into paddy wagons.

But his next piece of theatrics came as a disillusioning surprise to the strikers who had cheered the arrests and were referring to Kinkead now as “godfather.”

On the morning of July 26, he accosted the chairman of the strike committee outside the gates of the Standard and beat him savagely. Jeremiah Baly was a 22-year-old Socialist from Elizabeth, who’d been passing himself off as a refinery worker. He’d gone to Bayonne while on paid vacation from his job at the Singer sewing machine factory, initially to show support for the workers. Kinkead used Baly’s deception to splinter and invalidate the strike committee and to put himself in absolute charge, although his anger at being fooled seemed genuine.

With Baly now jailed (later, and very publicly, Kinkead would put him on a ferry, banishing him from the city), the sheriff returned to Mydosch Hall that evening. He directed two deputies to unfurl an enormous American flag, and when that got the strikers cheering, as he’d expected, he stepped forward and ordered them all back to work in the name of the United States, the flag, and himself. And the following morning, they went back—but not before Kinkead, once again in shirtsleeves, beat up a worker who seemed to be hesitating by the front gate. “I staged the whole affair,” he later boasted. “I dramatized the situation that confronted me.”

Even though a report issued months later by the United States Commission on Industrial Relations called the strike’s collapse “a complete victory for the Standard Oil Company,” wages for workers at the plant subsequently were raised, meagerly but raised: 10% for those earning up to $2.50 a day, and twenty-five cents for those who earned more. The most abusive foremen were removed.

A grand jury convened in the wake of the strike, but no indictments were handed down.

Fifteen months later another, equally violent strike broke out at Bayonne’s Standard Oil plant. But Eugene Kinkead wasn’t involved in that one. During World War I, he was commissioned as a major and served in military intelligence. In the years that followed, he became a successful banker and bank president. He died in 1960.