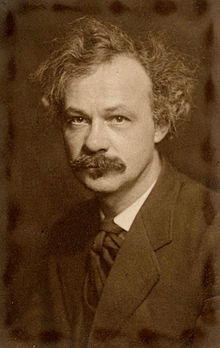 On New Year’s Day, just after two in the afternoon, a dozen city marshals arrive in a downtown neighborhood. They’ve come bearing dispossession notices for more than a hundred families participating in a rent strike organized by the Socialist Committee of Ten. Citing hard times, the Committee petitioned landlords back in November to reduce everyone’s rent by a dollar. Reduce rents! What, asked the landlords, would these, these—people want next, maid service? The tenements, many of them secretly owned by local churches, are filthy, unventilated, and dangerous. But so what? What of it? said the landlords in court. If these…people don’t like where they live, they can move. It’s still a free country. Thank God. Plunging into one flat after another, the marshals hurl down clothing and baby carriages, bed springs and chamber pots, a chromo of Pope Pius X….

Across the street, a stocky man with hair as dramatic as Beethoven’s and a longhorn mustache slowly shakes his head, then walks on.

His name is Jerome Myers, he’s 40, and a friend and neighbor of John Sloan’s—they live opposite one another on Twenty-third Street. He’s also a fellow painter, and, like Sloan, finds his subjects in ordinary city life. He has little patience—no patience!—for big shiny pictures of fruit. Or Spring Personified. And that trompe l’oeil stuff! Why would anyone choose to paint a meerschaum pipe, when—right over there!—is an itinerant dentist with forceps in hand, are the backs of old women at market? Ach, so let the cultured artists paint their pipes and Colt revolvers, their sentimental landscapes and languid ladies; let them win every ribbon at the Academy’s exhibitions; let them sell—Myers doesn’t care. Much. He’ll do the old women, the dentist, the lemon vendor, the dime-museum barker, the—

—dispossessed Italian man collecting his bed quilt from the stoop, his shaving brush from the gutter? Well…no.

As a young man, with a young man’s relish for drama, Myers often spent a day or two every week in the courthouse near his home, watching petty cases being tried. Gambling. Atrocious assault. Solicitation. Failure to pay child support. Please, judge, don’t send me to jail! The defendants pleaded, they wept, they avoided their mothers’ eyes. And Myers always left the gallery shaken and pale, his sketchbook blank. Often he couldn’t’ sleep afterwards. He’d imagined himself confined to the Tombs and pinch his lip till he cried out in pain. Finally he’d decided: enough! Enough drama, enough wretchedness. Why catch humanity by the shirttail? When he could go out into the fresh air and see more…pleasant things? Could bear witness to earnest, simple lives, to the struggle—the dignity!—of the historical poor.

But now it’s almost two-thirty and he should probably go home. His wife will be cross if he stays out much longer; it is a holiday, after all, and she has been alone in the flat all day with their colicky daughter.

A few more minutes. Just a few. Then home.

He wanders past a junk shop, looking in the window at mismatched china, then sits on a bench in Hamilton Fish Park. And makes sketches of children—beautiful! bright-cheeked! healthy!—with a stubby wax pencil. A very young girl in a blue shabby coat comes over to watch. He smiles at her. She turns and calls to her brother, He’s takin’ kids!

Kids? says the brother, then shouts, Hey! to some older boys swinging on a rope. Man’s takin’ kids!

Him—that guy, there! He’s takin’ kids! He’s a kidnapper! Get him! Grab him! Stop him! Kill him!

When the stones start to fly, Myers runs for his life.