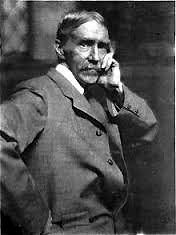 In Boston, it’s a cold, wet, and blasty morning. Tuesday, the seventh of January. Holding a cup of hot tea in both hands, Maurice Prendergast stands at his front window and watches the mail carrier (Mr. Wires, such a nice man) toot his whistle on the steps of a brick row house diagonally across Mount Vernon Street. A small gray-haired woman in a dark-blue dress opens the door. (Mrs. Catlow, no sweeter, gentler, kinder person on earth.) She takes all of her letters and gazettes, then disappears for a moment, returning with a furled umbrella, which she presses upon the dripping postman. And Prendergast, feeling his eyes tingle at the corners and turn moist, smiles radiantly.

The kindness of people! The goodness and kindness of people! It’s inexhaustible. Throughout his life–and he’s lived a long time, 48 years–he’s never seen anything to make him think otherwise. Never. Even when that Englishman stole his sketchbook in Paris and published it under his own name, Prendergast was scarcely fazed. He didn’t excuse the theft or the deception, but–where was the real harm? And no doubt the poor fellow regretted it all later on.

Prendergast’s younger brother Charles occasionally guys him about his unshakable altruism, saying, Monny, did you read in today’s paper about the good baker in Roxbury who poisoned his wife and three children? Ah, look here, Monny–the kind gentlemen of the Boston & Albany railroad have just doubled their passenger fares again. How nice of them!

Charles is such a wit. And so generous, so helpful, so kind. So good….

Struggling to hold his umbrella against the wind, the postman leaps a curb puddle and crosses the street. Delivers at Number 54, then passes Prendergast’s house (formerly a commercial building, a fish market) and stops again at 58. Well, that’s a relief. The last thing Prendergast needs today are more letters. As it is, he’s weeks behind in his correspondence, and doesn’t know how he’ll ever catch up.

The problem is–the problem with answering his mail?  Is that he can never just sit down, compose a letter, stick it into an envelope, and post it. No, first he must brew a cup of Darjeeling tea, then clear his table–everything off!  (Should he dust the tabletop? Might as well. It’ll only take a moment.) Then he’ll reach for his journal. (He always drafts his letters in there–this one on a page facing pithy quotations culled from Shelley, Nietzsche and Kipling, that one squeezed in between some ink doodles and a self-exhortation to Drink Less Coffee.) Then he’ll reread the letter which has prompted his reply. Then he’ll ponder for a spell–ten or fifteen minutes: exactly what does he wish to say? And finally he’ll begin: Dear Mrs.–/Dear Mr.–. No matter how intimate he is with his correspondent, he uses the formal salutation only. It’s how he was taught to do it at Rice Grammar School, it’s how he has done it all of his life.

Before copying a letter onto good writing paper, he’ll scrupulously correct it, making sure that no words are misspelled and striking out any sentence which might be construed as a gripe. Why burden, why bore anyone with news of his latest stomach disorder, his eyestrain, his worsening deafness? Sometimes he’ll spend a week, or longer, emending the briefest, most inconsequential note–a birthday greeting, for example. Ridiculous, of course; he’s well aware of that. But you know what everybody says about a confirmed old bachelor. Set in his peculiar ways.

He’s happy, though. A completely happy man. Living just as he pleases. Maurice Prendergast is possibly the happiest man in all of Boston.

But the pokiest letter writer.

And the most finicky painter.

Late in October he sailed home from France with nearly two dozen canvases, most of them beach scenes that he’d painted at St. Malo. Ready to frame and exhibit. Come November, though, he decided that a few of them–several of them–half of them–most of them could use a bit more…attention. But only a bit. And the color–the color could stand some…invigoration. Here and there. But just here and there. (And there.)

In early December, in a letter which took him nearly ten days to write and edit, he told Arthur Davies that he was still putting the finishing touches on the seventeen (or is that too many? do you feel seventeen is too many?) pictures he’d chosen to hang at Macbeth’s.

He expected to be done in another couple of weeks, he wrote. All was going well. And he couldn’t be happier or more excited.

Later in the month, in a Christmas note (laboriously crafted) to William and Edith Glackens, he mentioned that at last he was putting the finishing touches on the seventeen (or is seventeen, do you think, too many?) pictures he’d selected to hang in February’s show.

He was aiming to be done by New Year’s.

And couldn’t be happier, etcetera.

In a letter to his friend and patron Sarah Sears, which he’s been composing intermittently since last Thursday, and will try to polish a tad more this afternoon, if he can find the time, he’s written that lately he’s been (changing) (fiddling with) (strengthening) the (seventeen) (sixteen) (fifteen) (several) pictures that he’ll show next month at Macbeth’s Gallery. And he expects to be done (tomorrow) (Sunday evening) (next week sometime) (very soon).

Set in his peculiar ways, Prendergast habitually rises at seven, uses the same soft hair brush and foggy hand mirror that he’s had since boyhood, then breakfasts lightly on toast and a soft-cooked egg, topped just so with a spoon. He likes his coffee tan. In the mornings, he and Charles make picture frames–it’s their livelihood. (Charles is the craftsman , Maurice the assistant.)  After lunch he touches his toes thirty times and exercises with arm weights, then paints for several hours in his studio. Then he takes a walk. (This short, thin man with chalk-white hair and a walrus mustache nodding affably at neighbors and strangers.) He never varies his routes to the bakery, the wine shop, the post office, the library. With his brother, he dines out every evening–at Mieusset’s or Vercelli’s, the Boston Tavern or the German Cafe. He eats slowly, savoringly.

Life is uneventful, but satisfying.

And while Prendergast is surely a creature of habit, he’s not a victim of it. Within the general pattern, there is always room for variety. Take the summertime. If he’s managed to save enough money, he’ll sail to Europe and pass three or four months in Italy and France; if not, he’ll spend a pleasant week or two roaming throughout New England, painting seacoasts and beaches.

And then in late fall, and again in late winter, in lieu of taking a daily walk, Prendergast travels by surface-car to the L Street Beach in South Boston, where, no matter the weather, he swims for half an hour in the cold, cold water. It seems to improve his hearing, at least briefly.

For almost a decade, Charles has been urging him to consult an ear specialist, but Prendergast steadfastly refuses, simply won’t do it: he once spent two months at Cosmopolitan Hospital in Venice, and has had quite his fill of doctors, thank you. (Not that he doesn’t think that doctors are good and kind men, he does–they are! But all of their well-intentioned prodding, poking, and operating give him such jimmies.)

So he swims and he walks and he works out with weights, in the belief–in the hope–that if he keeps his body fit, his deafness will somehow reverse itself. That’s not possible? Of course it’s possible. Read the Sunday papers. (The supplements, not the news; there’s nothing worth reading about in the news.) Unfortunate people are always getting their sight back, their memories, their power of speech. You needn’t believe in God to believe in miracles. Just read your Sunday paper.

Prendergast remains, as ever, sanguine. Although (just between him and the wall) his deafness does seem to be growing more impenetrable with each new day. This morning: standing two feet from the window, he can’t hear the sash rattling or the rain scourging the glass. But look on the bright side: neither can he hear all of Charles’ hammering and sawing in the workroom downstairs. And he never has to listen to silly chatter. There is a peacefulness to his condition that’s not at all unpleasant. That is a blessing.

Yes, he would like to hear concert music again at Steinway Hall or Chickering Hall or the Tremont Temple; and yes, he would find it pleasant not to strain just to catch the drift of a conversation; and yes, he would enjoy a séance more if only he could hear the spirits rapping on the table. But. What is, is. He’s learned to live with his loss. Trained himself to look directly at a speaker, even to read lips fairly well. And he has the memory of music. He can still feel the table wobbling during a séance, can see the ectoplasm. And, of course, he can still paint. Even deaf as a post, he can still paint, do his watercolors, make his prints.

What if–what if he’d been an actor? A musician? A night watchman?

How lucky can one man get?