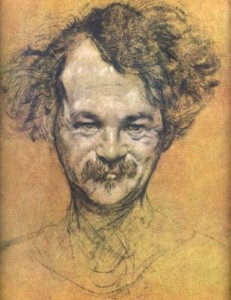 The baby just recently started to crawl, and now there’s no stopping her: one second she’s here, the next–scooted away–gone!  Under the gate leg table, behind the big upholstered sofa. Jerome Myers is forever, it seems, jumping up and chasing after her, snatching her away from the steam pipe, the cat’s bowl, the garbage sack. When Virginia is awake and scudding about, her chubby legs splayed, there’s no peace for Myers and the missus, none.

Take this morning. When Myers went down to the corner to get a newspaper, the baby was sound asleep in her crib, and Ethel was at the breakfast table humming to herself as she finished her tea and wrote in her diary. A peaceful scene. (Like a scene in the series of popular chromolithographs: “Why A Man Marries.” Thousands sold by subscription.) But ten minutes later, he returned to discover the ink bottle overturned, the diary moist and puffy with spilt tea, Ethel in a dither, and Virginia howling, trying to squeeze behind the wardrobe.

And that was only the beginning. Because then Ethel left, shortly after ten, to visit a friend uptown, and ever since Myers has been chasing his daughter around the flat, in-between bottle feedings, diaper-changes, and useless attempts to amuse her with musical spoons, this-little-piggy, and barnyard sounds. (He considered, once or twice, bundling her up and carrying her across the street to the Sloans’ flat–Dolly loves babies and has offered again and again to watch Virginia, any time–but he figured that’d be kind of a stinking thing to do, seeing as how John’s probably half-mad today with preparations for the exhibition.)

It’s almost noon, and at long last the baby seems to be slowing down. He gave her a bunch of thimbles and empty spools, and for the past few minutes–as many as six or seven!–she’s been absolutely, and blessedly, quiet, lying stretched out on the studio floor, attempting to make a tower of them. Myers gingerly reaches for his newspaper.

An ice-skater drowned in Van Cortlandt Park. Martial law in Muncie, Indiana. Two companies of infantry and one battery versus 3,000 striking employees of the Indiana Union Traction Company–street-car drivers, conductors, mechanics. A big drawing of the Gladys Vanderbilt wedding. A small one of Jack London. Who finally arrived in the Marquesas, seven weeks late. And, God bless us, more Harry K. Thaw. The case finally went to the jury late yesterday, after the District Attorney, in his final, impassioned remarks called the defendant (who was meanwhile fiddling with a tiny round celluloid box, trying to coax a pair of lead balls into a giraffe’s eye sockets) a pervert and a degenerate. A madman? No, gentlemen, a cold-blooded, cowardly murderer!

But a millionaire, thinks Myers. A cold-blooded, cowardly, millionaire murderer.

If he were a betting man, Myers would lay odds on acquittal.

But there she goes again, clambering straight for one of his paintings–Virginia! Honey! No! One of the paintings that came back last evening from Macbeth’s. It’s still in its brown wrapper and tied with heavy twine; so are the rest of them, the entire lot over there leaning against the wall: a bunch of lean-to’s.

Oh, just put them anywhere, he told the boy–a young Welsh lad–who’d brought them over in a wagon. Myers went out to the street and helped him unload. The boy looked strained, kept avoiding Myers’ eyes, and finally when he was ready to leave, he said, I hope you’re not discouraged, sir. Even rich people are feeling the pinch these days. Imagine! The kid felt sorry for Myers, for old No-Sale Myers. Nobody’s buying much of anything, he said. It’s a fact. Myers was so touched by his solicitude that he gave him a dollar as a tip. Then laughed about it later. His art has always ended up costing him, instead of paying him! Beginning twenty years ago, when it nearly cost him his life.

True story. One of his favorite stories, as a matter of fact. He’s told it a hundred times. How he was up on Madison Avenue and 104th Street making a watercolor sketch when it started to snow. Sunday, March 11, 1888. The snow kept falling, but Myers continued to paint–squatters’ shacks with billy goats grazing on the stony hill behind them. The blizzard caught him, all right, he nearly didn’t make it home, it took him hours, fighting the homicidal wind. Then he was delirious with a high fever for three-and-a-half days. And for all of that, he’d somehow lost the goddamned sketch! A favorite story. Easy to laugh about it now. And someday he’ll probably tell his friends about the Welsh boy….

Virginia’s struggling on his lap, she wants to get down, but Myers holds on tight to her, dandles her, gives her one of his knuckles to suck on, in case she’s teething–maybe that’s what’s making her so cranky today. The newspaper. Shall we look at the newspaper, Ginny? Let’s see what’s in the newspaper–shall we? Well! he says pointing to an advertisement. This is a nice picture. It’s an overcoat. Was sixteen dollars–reduced to ten dollars and fifty cents. See the overcoat? And that’s a bottle of fig syrup. Says here it’s an excellent family laxative.

She grabs for the paper.

Let’s just look, says Myers, shall we? And, with difficulty, he turns the page.

Isn’t this a nice drawing! he says. That’s a motorcar. And that’s the letter B. And that’s a night gown. Like Mama wears. And that’s–

Glory be, that’s Sloan and Glackens and Henri and Davies and Shinn and Luks and Prendergast and Lawson! Their heads superimposed on a crudely drawn artist’s palette. New York’s Art War and the Eight “Rebels” Who Have Dared to Paint Pictures of New York Life (Instead of Europe) and Who Are Holding Their Rebellious Exhibition All by Themselves.

The article written by James Huneker.

Virginia lets out a howl–Papa has tightened his grip around her middle. Reflexively. He kisses her on the head, apologizes, and puts her back down on the floor.

“The rebels are in arms,” he reads, “their brushes bristling with fight, and the conservatives stand in solid phalanx to resist the onslaught of radicalism.

“The question, as stated by the radicals, is: Shall there be an American art–an art that dares paint New York, for instance. Shall the American art school displace the schools of foreigners? Shall the streets and people of this big, picturesque town be the subjects for the canvas rather than the dikes and wooden-shoed peasants and Venetian sailboats of the older school?”

And so on. For several hundred more words, which Myers only skims, meanwhile rubbing an index finger back and forth between his lips, like a piston.

And he means it: good luck! May every picture sell.

He smiles, thinking again of the young Welsh boy, then smiles even wider, and with real pleasure, recalling his very first sale: must’ve been sixteen or seventeen years ago, he was over in Jersey City on a sketching trip, tramping the towpath of the Morris Canal, it was springtime, and he stopped to draw a little houseboat, it had a crooked stovepipe, there was a clothesline stretched across the bow. Nightshirts airing on it. As he made his drawing, a woman who lived on the boat came on deck and saw him. She waved him over. Then admired his picture, and made him a proposition. She’d buy it, she said, would pay him two dollars for it–if he’d agree to draw her baby into it. Two dollars! Which Myers immediately changed into small coin just as soon as he got back to New York, and then, according to the prevailing superstition, scattered the change around his flat, for good luck. Of course, within the same week, he had to get down on all fours and go collect it up again, to eat.

The lady on the houseboat.