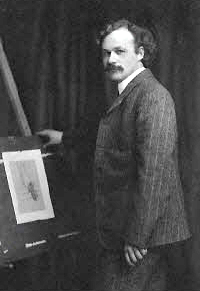 Around six in the morning, Friday, January third, Jerome Myers wakes feeling anxious, mind abounding with Things to Do, that Must Be Done. Buy varnish. Borrow Sloan’s handsaw—

Beside him, Ethel stirs in the bed, swallows noisily, coughs once, turns over.

—and postal stamps! Get stamps. And stretcher bars.

Myers draws the blanket up to his nose, then over his head. Wishing it were—November. October. July!

And that his one-man show at Macbeth’s were still months away.

Instead of weeks. Three short weeks.

He ought to stay drunk till it’s over. Good idea! Just get snockered. He ought to. Seriously! But he won’t. Too many details, too many chores. So much preparation. Utterly nerve-wracking. Sleep-spoiling. (How many postage stamps?) And then once the paintings and drawings are hung? Oy. The ordeal really begins. He’ll traipse to the gallery every afternoon (even if it’s raining; in a sleet storm, even) hoping against hope to find a tiny red pin—sold!—stuck in the wall adjacent to something, the cheapest etching, the smallest pencil sketch. Mr. Macbeth—brown hair slicked back, clothing impeccable and without so much as a shred of lint—will be so cheerful at first, encouraging, positive. Not to worry, Jerome. There’s a lot of interest. Just run on home like a good fellow, and relax. But by the second week? Poor Macbeth will start to look a bit…strained. Well, there are a few days left, Mr. Myers….

It’s monstrous! And the worst part? Are the critics. If one admires the compositions, another will slam them. Virtually sneer at them. Using words like busy, confused, jumbled. And if someone (FitzGerald, maybe—he’s a good egg) praises the draughtsmanship, the figure work, then someone else (that devil from the Times!) will suggest that Myers go back to art school and learn to draw. The quicker the better. And so on and so on and so on and so on—till Myers’ confidence and sense of his own talent is thoroughly fuddled. It’s happened before. And will happen again—he’s sure of it!

In the front room, the baby starts to cry, and Myers immediately rolls out of bed and pulls on his trousers, glad for an excuse to move, to get going, to conquer the habdabs before they ruin his day completely. By the time he reaches the crib, though, Virginia is sleeping peacefully again, a thumb plugged into her mouth. For just a moment, Myers considers scooping her up anyway—holding her in his arms, carrying her around the flat, cooing and humming into her ear. But that could backfire: he doesn’t want to start her squalling, and he certainly doesn’t want to wake the missus. So he merely adjusts his daughter’s blanket, and walks into the kitchen. Varnish and…proof the catalog copy! And? And something else…

After lighting a burner on the stove, he reaches down the tea, in a canister with a lid featuring the manic face of the Yellow Kid, as well as George Luks’ scratchy signature above a New York World copyright notice. Myers, who never reads the Sunday funnies, wonders if old George is still drawing comic strips, still working for Joseph Pulitzer. Occasionally he’s thought about trying his own hand at one of those silly things. How hard can it be? And the money! Is extraordinary. Yellow Kid tea, Yellow Kid cigarettes, Yellow Kid whiskey!

He remembers once hearing (and not from George; if he’d heard it from his nibs, he would’ve paid no attention) that Luks was pulling in almost five hundred berries a week drawing that bald-headed, jug-eared street urchin. Could it be true? A week? Some time ago, Myers shared a studio on Broadway with Gus Verbeck, who turned out a couple of comic strips for the Herald—“The Upside-Downs” and “The Terrors of the Tiny Tads”—and Myers doesn’t recall Verbeck making that kind of mazuma. Though, of course, his stuff was never as popular as George’s, or Dick Outcault’s, or—what’s that other fellow’s name, the German fellow? Who draws “The Katzenjammer Kids”?  Robert Henri’s pal. The Sunday painter. Dirks! Rudy Dirks! Could Rudy Dirks be getting 500 a week—or more!—just for cranking out the Katzies? For drawing little square pictures? And filling in balloons with pidgin English? God in heaven!

Maybe he should try to work up a comic strip, Myers thinks. Even John Sloan did one, years ago before he came to New York. “Paul Palette, the Practical Painter.” And if Sloan—whose sense of humor you’d never call highly developed, to say the least—could draw for the funny papers, why couldn’t Myers? Maybe he will! He returns the tea canister to the shelf, and while he’s waiting for the water to boil, then for the tea to steep, he tries to concoct some ideas for a Sunday comic. He could draw one about…about…about….

But all of a sudden he’s gumming his lips, rubbing one hand up and down a cheek and tapping the other against the stove. Fidgeting. Right back on the anxious seat.

He adds sweetened milk to his tea, and stirs.

Buy tacks at the hardware store. And he ought to see about trying to get himself interviewed. By somebody.

God, wouldn’t it be heaven if he didn’t have to do everything himself. Think of everything. Misery loves company. So true!

Which is why Myers prefers group shows. I’ll by the stamps, you telephone the Tribune. It’s so much easier when everyone is looking for those bright-red dots, when everyone is jumpy—you can even joke about it. Huddle in a corner and make fun of the snooty types. And if you get roasted, well, it’s only a sentence or two. Not five paragraphs!

He would much rather be showing as part of some group this winter than all by himself—oh, much, much rather.

And the group he’d most like to be associated with is Sloan’s. All last spring Myers kept fishing for an invitation to join their exhibition (…So how’s it shaping up, John?) and when it finally dawned on him that he wouldn’t be getting one, he sulked for weeks—though if anyone, even his wife, asked him what the matter was, he’d say dyspepsia. While gently touching his stomach.

By summer, he was irritable. And blamed it on the heat.

Through the fall, he was morose. A touch of neuralgia.

The Eight! It damn well ought to be the Nine! He belongs with that group, in that show; half the people he knows just naturally assume that he is. A challenge to the Academy? We’re on your side, Myers! A rejection of parasols and bowls of perfect apples? A declaration of independence by realist painters—by urban realist painters? We wish you and your friends good luck, Jerome.

Now, Myers has always considered himself a gracious man, a charitable man, not a man given easily to heartburn and petty jealousy, but the more that he’s brooded about this matter, the less inclined he is to be so…open-minded. He isn’t welcome in the group, but Lawson is? Ernie Lawson? Nice fellow, fine chap, good company, but—for God’s sake, Lawson is a landscapist!  An Impressionist. Trees, fields, a frozen river, a band of gray sky. And not a single human figure.

And Davies? Is a fantasist. Unless, of course, the ladies in his particular neighborhood gambol about stark naked with laurel in their falling hair, and feed flowers to unicorns!

What on earth are those three doing with Sloan, Glackens, Luks, Henri, and Shinn? Doing in an exhibition of realist art?

Why them…and not him?

Though only because he hasn’t wanted to embarrass John.

Who, after all, is a dear friend.

Myers taps tea leaves into the garbage sack, then rinses the cup, dries it and puts it away.