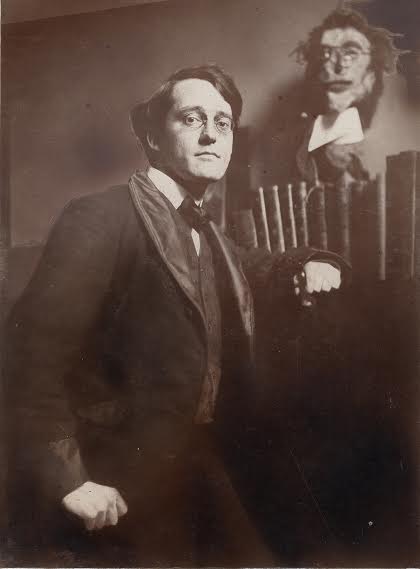 On the last day of December, 1907, John Sloan is taking dinner by himself at a Chinese restaurant. He’s brought along a book to read—Joseph Andrews—but it sits unopened in his lap. Because: at a table by the front plate window, a young woman brazenly puffs on a machine-made cigarette, causing several older people to stare at her as if she were dining with a rodeo Indian. Sloan composes and recomposes the picture in his mind, taking away a superfluous potted plant, adding cafe curtains, an ashtray, a cruet of soybean sauce.

Then his waiter appears, and Sloan–who’s ordered the usual chop-suey–eats quickly, every mushroom and sprout, every last dab of chicken. Meanwhile eavesdropping on nearby conversations. He hears Bill Haywood’s name mentioned, and Gladys Vanderbilt’s. And, say, have you seen Maude Adams yet in Peter Pan? You must. But hurry. It closes tomorrow night.

Finishing his meal, Sloan lights a pipe and wonders if Dolly has eaten yet. Probably—it’s already after seven. Did she have wine with dinner? He hopes not. And no scotch highballs, either! She went to Philadelphia a week ago today for some dental work, but also—especially—to escape, for a while, the rigors of New York. Her physician told Sloan, Think of your wife as a game leg. He couldn’t explain her drinking, her anxiety, her mental depression. And a cure, he said, was simply out of the question. Think of her as a game leg. Poor, tiny, neurotic Dolly. Sloan misses her and needs her, and feels so aimless without her. She’s due back home January third.

Carefully, Sloan removes his eyeglasses—a flimsy pair, with almond-shaped lenses—and polishes them with an edge of white tablecloth. His face is an oval, clean-shaven, and pale. He’s 36, but looks a decade younger—you might easily mistake him for a bank teller, or a floor manager at one of the big department stores. Wanamaker’s, or Franklin Simon. But on second look, no. His clothing is too wrinkled and shabby, too frayed. Well, then, a file clerk at the Bureau of Vital Statistics. Certainly he doesn’t look like an artist; artists wear tight suits with red carnations—don’t they? And colored spats and chamois gloves? And berets? Glory be to God, Sloan would rather wear a sunbonnet than a beret. Sooner be reckoned a cabman than one of those ninnies at the National Academy.

Leaving a quarter on the table, he takes his coat from a hook, and then starts for home along crowded Sixth Avenue. The evening is mild, almost warm for the time of year, with strong westerly breezes full of grit from the elevated railroad. Vendors sell rattlers and horns, and confetti in paper sacks. Officers of the Metropolitan Police—still predominantly Irish, with brogues—twirl their short billies and glare. Ring that cowbell one more time, stupid, and I’ll shove it down your ginney throat. Yes, you! Sloan stands on a high curb, waiting to cross. And checks to make sure that he still has his billfold.

A high, open gasoline car, jammed to the doors with passengers, turns sharply into the avenue. Its acetylene headlights are dazzling, its muffler inadequate. On the opposite corner, several boys—two of them wearing gray caps set askew on their heads—root through a trash barrel, searching for tin cans and pieces of brick or masonry to stick into them. Window-smashing is a hooligan tradition on New Year’s Eve.

Although he would like to, Sloan won’t be celebrating later tonight. He has to work. Earlier in the day, he received a note from the editor of the Associated Sunday Magazine. Would he care to illustrate an excerpt from Mark Twain’s autobiography? Yes, sir! And thank you very much, Mr. Willing, for thinking of me.

It’s an unreasonable deadline—Thursday? That’s only the day after tomorrow! But he’s promised to meet it. And with the rent due shortly, and the grocer to pay, he certainly will.

Sloan makes his living, spare as it is, doing commercial art, chiefly illustration. At least twice a week, out he goes with his portfolio, calling at Scribner’s, Collier’s, McClure’s, Munsey’s, Cosmopolitan, Everybody’s. To him, it doesn’t matter beans whether a magazine is Democrat or Republican, highbrow or low, for women or for children, on good stock or pulp: how much does it pay? How soon?

But for all of his rounds-making, he’s landed just twenty-one assignments in four years. And the material! Drivel, mostly. City-Irish and city-German farces, stories of first love and star-crossed lovers, sentimental stuff he’d never read on his own.

The good stories, and the checks of legendary amount, go to the “popular favorites,” to Howard Pyle and Edwin Austin Abbey, Arthur Rackham, Maxfield Parrish, N.C. Wyeth. And to Gibson, of course. Charles Dana Gibson. A thousand dollars a willowy girl!

Most freelancers, though, earn around seventy-five dollars a job, which might call for nine or ten pictures, plus revisions. And rates can drop without prior notice. After last winter’s money panic, they did, sharply. Sloan will be getting only sixty for the Twain illustrations. Another thing: payment is often delayed, on a whim.

Sometimes, in tight times, Sloan has wondered if he should just pack his few belongings and sail away. To England. Where life, he’s heard, is radically cheaper. But that’s silly, he’ll never go, he knows that. It took him years to work up the courage just to move from Philadelphia. What on earth would he do in England? Unlike his friends, he’s never been abroad, and has no burning desire to go. It seems to him—abstemious, hard-working John Sloan—that most American artists in Europe just fritter away their time, traipsing from cafe to seacoast, and back again.

He lives in the attic of an old house across from the Chelsea Hotel, on Twenty-third Street—165 West. The other tenants are dressmakers, barmen, prostitutes and pimps. Recently, Sloan had to secure his ice box with padlocks and an electric bell after one of them filched it of jams and fruit and a bottle of milk. One day he’ll move someplace better, safer, larger. His paintings will start to sell and then he’ll move. In the meantime, here he is. In three small, gas lit rooms with low ceilings. A coal stove for heat.

His studio faces north, a row of brick tenements on Twenty-fourth Street, and their back windows are Sloan’s private theatre. He can sit perfectly still for hours, and watch: christening parties, and lovers’ quarrels, the death of a baby in its mother’s arms. Spaghetti dinners at three in the morning, and conjugal sex on narrow iron beds. Boys feeding pigeons.

Watching, Sloan never sketches, but he has done a few memory paintings afterwards of life glimpsed across the way. Those canvases, and others, are stacked against the attic walls. He’s finished twenty-seven oils this year, more than two a month. Not bad. His friend Robert Henri once cracked that “Sloan” is the past-participle of “slow.” But two a month—that’s slow? By Henri’s standards, yes. He can finish two a day. The maestro. Knock out a face, and make it a good likeness, in forty-five minutes. Sloan could never paint that fast, nor does he wish to. Besides, he’s running out of space.

As soon as he comes in this evening, Sloan fixes himself a cup of tea, then sits down and reads through the Twain galleys—illustrate this? this? possibly this? It’s murder on his eyes to work at night, but he doesn’t dare put off starting till tomorrow. And so he proceeds doggedly. From time to time, he hears police whistles, a motorcar’s siren. Cannon crackers and music-hall singing. Waltz me around again, Willy. Around around around….

Uptown in Times Square, hatted heads bob, pickpockets jostle bodies, beg pardon, and speed away. Colored confetti—scarves—derbies—blow in the wind. Lost children howl. Newspapermen, a small army of them, scribble notes. Record-breaking numbers of people. Less public drinking in evidence, compared to other years. More unescorted women than ever before.

On Forty-fourth Street, a beardless young man steps from a vaudeville theatre and is immediately surrounded by a dozen girls. They join hands in a circle and won’t let him pass. Each time the poor man tries to break away, they spin him like a top. Help! Help! They snatch at his coat buttons, then at his privates, and his borrowed silk hat topples off.

At the Haymarket dance hall, a Frenchman drops to one knee, proposes marriage to a stranger. When she strikes him with her handbag, he knocks her unconscious.

At Sherry’s and Delmonico’s restaurants, where opera singers and architects and Wall Street men are celebrating, the dining rooms are trimmed with smilax and hung with American flags. At the Hotel Astor, musicians dressed as gondoliers stroll from table to table, caroling “The Belle of Napoli” and “The Finicula.” At the new Plaza Hotel, there’s nearly a riot—six thousand revelers shoving and pushing, trying to get in without reservations. Coaches and electric broughams keep arriving.

In the lobby, Mrs. Stuyvesant Fish, the distinguished dowager, stands immobilized, her passage to the tea room blocked! Although notorious in society as a devilish wit—she’s given dinner parties for unpedigreed dogs, for nursery dolls, even for a capuchin monkey—Mrs. Fish does not find public disorder amusing. She presses her lips together so tightly that her face powder cracks.

But suddenly a young gallant—teeth white, hair brilliantined—springs to action. He elbows his way toward Mrs. Fish. Madam, he says, follow me. Then, using athletic shoulders and arms, he plunges like a footballer through the obstreperous crowd. Make way for Mrs. Fish! Please! This is Mrs. Fish! At last, he reaches the tea room with the grand dame clinging to his elbow. Flushed and breathless, he steps aside, and Mrs. Fish, without a word of thanks, sails past him like a corsair.

Two miles south of the Plaza, on Tenth Street, several hundred men and women—mostly men, though, of middle age—are standing in the charity line outside Fleischmann’s bakery. Around eleven-thirty, a horse-drawn cab pulls to the curb, and from it steps a small, pretty woman holding a champagne flute. Her escort follows her to the front of the line. He’s uncomfortable just being here, but the woman has decided to get a free slice of bread and a cup of strong coffee, just for the fun of it. So she can tell her friends all about it later.

When are they going to open up? she asks an unshaven man on line, a German. Do you know? She puts down her champagne glass and begins to pound on the doors. With both hands. She can’t stop laughing.

Stop dot! says the German. Get out of dot!

The woman’s escort takes offense at his tone of voice. Listen here, Fritz, you don’t speak to a lady like that.

The German waves his arm. People that come down and laugh make me tired, he says.

Darling? whispers the escort, this is a bit too rich for my blood. He frowns, then stoops and picks up the woman’s glass, and they walk quickly away, back to the cab. As it’s leaving, the woman throws her glass out the window. Miraculously, it doesn’t break, and as soon as the cab is gone, one of only four negroes on line goes over and picks it up from the street. After the bakery doors open, he carries it inside and fills it with coffee. Just then, every tug boat in city waters blows its whistle. Happy new year! shouts the negro. And God bless us all! Then, promptly, he drinks a toast.