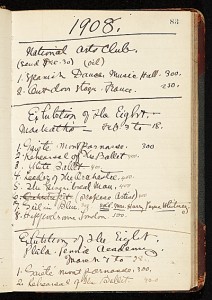 And so it’s over.

The exhibition closed yesterday–Saturday, the fifteenth of February–and this afternoon the paintings are to come down off the walls. Macbeth’s people will be doing that, much to John Sloan’s relief. Though he does hope they’re careful about it; seems like every time he’s had pictures hung, at least one of them has returned home with a puncture hole or a broken frame. We’ll be very careful, says Macbeth, anxious to get Sloan out, so the dismantling can begin. We know our business, we know our business here!  Pumping Sloan’s hand and simultaneously patting him on a shoulder. You just let us take care of everything! He seems a bit giddy today, Macbeth does–but why not? The sales amounted to nearly $4,000, and that’s damned respectable, according to the dealer. Who’s absolutely convinced that if the financial climate were only better he could’ve sold yet another $4,000 worth of pictures. And next time we will, he tells Sloan at the elevator, then shakes his hand again, wheels around and walks back down the long, empty corridor to the galleries. Stops, turns, waves, and says, A great success!

The weather is wretched today, snow in the morning,  now a hard rain, and as Sloan heads for home, the wind keeps catching his umbrella and snapping it inside out. Finally, the thing is ruined, the fabric torn from the skeleton, the ribs tinkling like chimes, and he dumps it in an ashcan set out near the curb. Across the avenue, a man is running, leaping puddles, and bellowing Italian opera.

And though drenched and cold, Sloan feels almost like singing himself today. Great success? For sure. It all went right well, right well. In the final tally, even the press was on their side: for almost every review that panned the exhibit, that complained of stab wounds to the optic nerve and clashing dissonance, willful ignobility and common coarseness, there was another one, sometimes two, that proclaimed the show a victory for realism, and a milestone. And Glackens was so certain they’d be roasted alive!

Dear Glack. Who still can’t believe the group’s been invited to rehang the show at the Pennsylvania Academy of Art. In Philadelphia! The old home town! And there’s even talk of sending the pictures to Boston, Chicago, Kansas City….

Walking west along Twenty-third Street, Sloan sees an old tramp standing pressed up flat against a metal shop-grating, all his worldly possessions–some empty bottles, a soft hair brush, a book of sheet music, a blanket–jammed into a cardboard box stenciled Paine’s Celery Compound. The tramp, Sloan observes, is wearing a black brogan on his right foot, a Western riding book on his left.

And looking down the street, he sees the elevated railroad tracks enveloped in mist. A train, a shower of blue sparks.

…Toledo, as well!  And Detroit! Boston, Chicago, Kansas City, Toledo, even Detroit. Nothing’s firm yet, but–in his capacity as group secretary–Sloan, good old Sloan, has been in touch with almost a dozen galleries and academies and art schools, answering their letters of query, listing possible exhibition dates, and making it clear, absolutely clear, that freight charges and insurance costs would have to be paid by the borrowers and not by the lenders. Imagine that: he’s making demands now, and nobody is scoffing.

Even the National Academy is holding its institutional tongue; in recent days there’s been scarcely a peep about rebels and bunco radicalism from the palace on Fourth Avenue. They’re still in shock over there. And trying, so far in vain, to drum up some public enthusiasm for their Spring Exhibition, set to open in just a few weeks. Rumor has it, the Academy is ready to do away with its old-guard Hanging Committee, and abolish skying. And welcome submissions from art students, even from members of the Eight! Henri is coltish with glee–unbearably so, Dolly thinks.

And she also thinks he’s been taking far too much of the credit–why is it, she wondered yesterday, that in the newspapers it’s always Mr. Henri says and Mr. Henri believes and Mr. Henri is of the opinion that.

And besides, Glack is up in Connecticut, Prendy’s in Boston, and Shinn is in seclusion, designing toys that he intends to market; Lawson has disappeared (somebody said to North Carolina), and George Luks has been on a tear since a week ago Wednesday. And Arthur–Arthur intimidates people. Hardly anyone wants to speak with Arthur. So that leaves Henri.

Haven’t you forgotten yourself? said Dolly.

But by then, Sloan was out the door, carrying his portfolio, on his way to McClure’s to pick up a story.

Though he’d heard, all right, and might’ve answered: No, I haven’t forgotten myself…but what’s the point of gassing? Or gloating.

Let’s just enjoy the great success, and get on with other things.

Such as earning some money to pay Cohen the landlord, who’s been around twice since the first of the month and will not be put off very much longer.

Luks, Lawson and Shinn each sold one picture out of the show; Davies and Henri, two apiece. But nothing by Prendergast. Or Glackens. Or Sloan.

Ah, well, it was still a great success.

When he comes into his flat now, he’s soaked to the skin, his overcoat is steaming, his eyeglasses are fogged. Now for some towels, some dry clothing, a nice hot cut of tea–and then maybe (why not?) indulge himself, get comfortable in the good chair and finish reading Joseph Andrews. But before he has the chance even to kick off his shoes, Dolly hollers to him from the studio–come quick, thank God you’re back! Calamity!

The roof is leaking in half a dozen places, and the floor is puddled. She’s already set out the stock pot and all the sauce pans, even the tea kettle, and now she’s racing around, moving picture frames and a bolt of canvas to safety. Damn it, damn it, damn it, she says, then bursts into tears. And when he tries to console her, he realizes she’s been chewing on cloves. And he knows what that means. God in heaven. Everything is changed, but nothing is, really. I’ll get the mop, he says.

But Dolly insists that she can take care of that–and Sloan ends up going back out again in his wet clothes. Lugging a shovel, he climbs through the skylight. To clear off the slush, so the roof won’t cave it.

–dedicated, in awe, to the artists, everywhere, who push on despite all of the injuries

Continue to read NOTES AND BIBLIOGRAPHY →