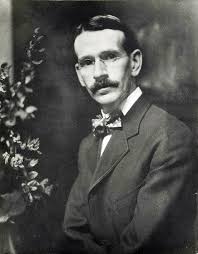 William Glackens and Ernest Lawson are the first to arrive, followed almost immediately by Everett Shinn, impeccably dressed as usual (tonight it’s an English-tweed suit and box-toed shoes). As the five of them are shaking hands and exchanging art gossip, there’s a loud crash on the landing below, then George Luks appears in the doorway, panting like a dog in July, one fist pressed to his heart.

Staggering in, he tears off his muffler, then collapses on the sofa. He’s been shot! Three times! By the Black Hand! He—he—by God, he thwarted their scheme to plant an infernal device in an Italian restaurant! Jumped them from behind, the bastards—knocked them down—snatched the bomb (in a brown paper sack) and ran it to the East River. But—my slats! Those devils were angry! Chased Luks all the way there, then all the way here, firing their pistols. Henri, lock the door, for Christ’s sake!

Rolling his eyes, he grits his teeth, breathes his last, and tumbles off the sofa.

Unlike the others, Henri is not amused. If Luks is in form tonight, they won’t get any business accomplished. The man is—a nuisance. Talented, but…a terrible nuisance. And he’s been so for as long as Henri has known him, which is already more than fifteen years.

They first met in Philadelphia. This was shortly after Henri’s return from France, when he was teaching anatomy and composition at the School of Design for Women, and holding open-house every Tuesday evening at his studio on Walnut Street. What had begun as a sketch class (“The Charcoal Club”) turned gradually into a forum for Henri’s theorizing. Fired by his readings in Whitman, Emerson, and Thoreau, and echoing Thomas Eakins, he’d deliver extemporaneous lectures to a group of ten—fifteen—sometimes as many as twenty—young commercial artists and newspaper illustrators; he’d urge them to take up painting, to paint what they saw, to paint everyday American life. Truthfully. Drift among people! Move through life as you find it, men, not passing negligently, but stopping to know it—to note it! He became their mentor, praising (sometimes overpraising) their first tentative black-and-gray efforts, pressing them to paint more, more! Everybody was impressed by his fluid speech, his passion, his flip disdain for orthodoxy and institutions.

Everybody except George Luks.

It wasn’t so much that Luks disagreed with Henri; he simply hated art-talk, period. He thought it was so much gas. Talk, talk, talk. My slats—live! That’s the ticket. By and by—and much to Henri’s relief—he quit showing up. Unless, of course, there was to be a party; then he’d be there, sure enough. In a buffalo-plaid jacket, cream-colored corduroy pants, blue shoes and white socks. Sometimes with a pink rose tucked behind one ear. He’d melt the cheese and add the suds to the Welsh rarebit, then step onto a model stand (or climb on a table) and play the banjo, the comb-and-tissue, a set of drums that only he could see. For several hours. Till finally he’d collapse and crawl on his belly into a corner.

Once Luks had passed out, Henri would step away from the wall, tugging on his waistcoat or briskly rubbing his hands together. Then, clearing his throat, he’d ask in a loud voice, Has anyone not seen that volume of Hogarth prints I’ve passed around…?

Tonight, Henri fidgets as George Luks—ignoring Shinn’s offer of a hand—picks himself up from the floor, tosses away his overcoat and sits down. For a moment he’s quiet picking splinters from his hands (serves him right, thrashing around on the floor!) and Henri decides to call the meeting to order, even though Arthur Davies hasn’t yet showed. But he’ll be along any minute, no doubt. (Suddenly, in the middle of some discussion, Henri will glance around and—Arthur will be standing there; solemn, severe Arthur B. Davies with his hands folded primly on his stomach, his thin lips pressed together in a half-smirk. He’ll just…appear. Looking like an undertaker or an underwriter in his good black suit. Arthur has always been rather mysterious.)

Henri begins by mentioning that Craftsman article. It’s quite satisfactory, he thinks. Quite laudatory. And those, he says pointing to several sheets of typescript which George Luks is currently sitting upon, those are more letters I’ve written to the newspapers concerning our show. You might look them over. Now, I believe our secretary-treasurer has a few things he’d like to say. John?

Sloan remains seated, but takes out his ledger book. After briefly looking over the entries (which he doesn’t need to do; he knows perfectly well who is in arrears and who isn’t), he asks Luks and Shinn and Lawson if they’re prepared to pay the balance of their assessments.William Macbeth has demanded a $500 guarantee for the use of his gallery; besides that, there’s advertising to buy, and a printer to pay—the catalog is going to cost at least $200, possibly more. Then there’s the cost of envelopes, postage, photographic film development, etcetera. It’s endless! George? You still owe—

Busted, says Luks. Temporarily flat busted. Though he expects a check (from … somewhere) in the next few days. Friday, John. Monday at the latest.

Sloan, who can be sniffy, has to restrain himself from wondering out loud how Luks can afford to carouse every night of the week, yet can’t raise the lousy fifty bucks that he owes and has owed for several months. But what’s the use of an argument? Friday, he says, would be better than Monday.

Stroking his little black goatee, Lawson looks mortified, even more dejected than usual, and Sloan feels a pang of sympathy. Damn! Why’d they elect him treasurer, secretary-treasurer. How come he has to do all the dirty work?

Ev? How about you? Do you have the money?

Money? Money? Shinn laughs. And Sloan grinds his teeth. No money. Very difficult to believe. Because each time that Sloan meets Shinn on the street, where is the duded-up scamp always off to in such mad haste? Uptown! Of course. To paint yet another Rococo mural (God help us!) for some ten-millionaire. Small-breasted cupids on demand. The Shinn Specialty.

Sloan takes a last glance at the ledger, then snaps it shut. One more thing. In the interest of thrift, he says, and so that no further assessments need be made, he’s volunteered to do all of the catalog photography himself. Good old Sloan! He’d like to get started as soon as possible, though. Say early next week?

And now it’s Henri’s turn again. After unbuttoning his jacket, he prowls the floor. Speaking of the catalog, he says, it’s almost time to think about having the type set. Which means that an irrevocable list of paintings has to be prepared. In the next few days.

Lawson says he can provide his list tomorrow. He’ll drop it off at Sloan’s flat, there’s no need for Sloan—or anyone!—to come pick it up. He’s ashamed, poor man, to let anybody see his tiny room on MacDougall Street, it’s so—miserable; greasy walls, greasy lintels, one chair, one table, a mattress and an easel.

Glackens, who hasn’t spoken a word in half an hour, leans forward suddenly in his chair. List? he says. How can he ever hope to make a list? Every time he’s finished a painting lately, he’s ruined it the very next day, trying to improve it. This show! he moans. This damn show.

Shinn smiles from ear to ear. Perfectionists! Are crazy. Absolutely bughouse. Just do the damn thing and be done with it! He takes out a small piece of white cardboard (he still carries half a dozen in his pocket at all times, same as he did when he was a news artist) and begins jotting down picture titles. Here’s his list.

George? What about yours?

Luks tips back his head and studies the ceiling. He’s—not—quite—certain yet. What he wants to hang in the show. He has, of course, plenty of finished paintings to choose from, but he doesn’t want to be locked into a certain bunch of paintings in case he knocks out some new masterpiece—or two—or three—between now and February.

Say! Did he ever mention the time—maybe not!—the time an express man knocked at his door, to pick up a painting he’d promised to the Art Institute in Chicago? Well, says Luks, I’d forgotten all about it, and didn’t have a single picture on hand—so I just pulled that poor bastard inside and painted him. On the spot! Then sent him off with a wet canvas.

Yes, George, you have mentioned that before, says Henri. And it won first prize, didn’t it? Nevertheless, couldn’t you give us a…tentative list?  Henri glowers murderously at the great big nuisance, then glances away, and—

Arthur! he exclaims.Welcome! We’ve just been—

But Davies lifts a hand—no need to tell him about the discussion, he’s been listening to it. (How long has he been standing there, like some haunt?) And now, if it’s all right with everyone, he’d like to say a few words, himself, about the catalog.

Of course, says Henri, who is somewhat in awe of Arthur Davies, not only because the fellow sells more paintings in one year than Henri does in five, but because he’s so inscrutable and self-possessed, in the manner of his father, Mr. Lee.

Davies folds his arms, coughs once, then speaks—without gesture, without facial expression, seemingly without even moving his lips. Since he’s in charge, he says, of laying out the catalog—since that’s his duty—he’s naturally given the matter a great deal of thought. Take the frontispiece, for example. It’s his…opinion that everyone’s name should appear in alphabetical order. Let’s be democratic. Agreed?

Henri bounces back onto his feet. Shall we now consider the mailing list? And from his jacket he plucks a sheet of paper, folded once length-wise. Containing the names of prominent collectors, museum curators, fellow painters. And, of course, art critics, both friendly and hostile. Now, tell me if I’ve forgotten anyone, he says, then begins to read off the names.

The meeting lasts another three-quarters of an hour, the final twenty minutes, however, completely taken up by a demonstration of shadow-boxing, courtesy of George Luks, alias Chicago Whitey. Who dances and jabs and ducks and weaves all around the studio, then all around again, his lush forelock flopping like the world’s largest paintbrush.

As Henri is putting away what’s left of the pretzels, Arthur Davies quietly disappears.