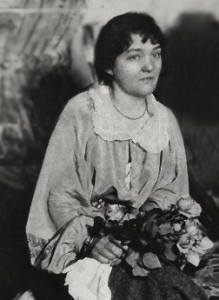 After lunch, John Sloan (hair wet-combed, fingernails clipped) walks down to the foot of Twenty-third Street and meets Dolly at the Pavonia ferry. After squeezing and kissing her as though she’s been away for a season instead of a week, he makes a thorough examination of her dental work. Looks right good! (And not a trace of alcohol on her breath! Sloan decides to believe she hasn’t had a single highball, not one, since leaving New York.) Your smile’s even prettier than before, he says. And hugs her again.

He first met Dolly—Anna Marie Wall—in the late nineties, at one of the monthly parties at Robert Henri’s Walnut Street studio. Sloan was 27, Dolly just 21, but it was she who struck up the acquaintance. He was terribly shy around women, always had been; they flustered him, made him clumsy, hot in the face. He could never think of what to say. But that was all right with Dolly. She didn’t mind doing most of the talking, it was fine with her.

She told Sloan that her parents came from Ireland, that her father had invented naptha soap. It should’ve made him rich, but—well, he was terrible at business. The worst. He was dead now, though. So was her mother. And she was living with her half-brother and her half-brother’s horrid English Quaker wife. And working at Lit’s department store. As a bookkeeper. Which was all right, but dull. Dull as school. Then she told Sloan he was very handsome, that he had lovely thick hair, and such beautiful hands. So—do you think we might get together and do something? What about this Saturday? Are you free on Saturday? Sloan stared directly into her face (milky skin, a few freckles, blue eyes), then he smiled, then he blushed. He’d never before met a girl who was quite this…forthcoming. Forthcoming, hell! Bold as brass!

Although Sloan began to keep regular company with Dolly Wall, taking her on picnics to the city parks and on railroad excursions to the countryside, to Atlantic City for a weekend and New York for several days, he kept postponing any formal engagement. After all, he was the family breadwinner. He had his sick mother to consider, and his two younger sisters, and his father, a dazed and melancholy man who’d failed at every job he’d ever had, from furniture maker to corner stationer, and now puttered around the house in worn-out slippers and a bathrobe. The family depended on Sloan’s paycheck. Had since he was 14. He couldn’t very well support them and a wife. Not on an illustrator’s salary, he couldn’t. Impossible.

And besides, Henri practically forbade him to marry: Don’t become entangled, he said. It’s ruinous to an artist. You might consider taking a mistress, he said, a mistress is quite all right. But marry? Never! Remember who you are, he said. You are John Sloan. A painter of genuine talent. Marriage can prove fatal to a career. (That’s what Henri said. And then what did Henri do but go off and get married himself!)

But there was yet another reason—and it was the most troubling of all—for Sloan’s reluctance to take the plunge. Dolly was an alcoholic. She’d started drinking (with neighborhood boys) when she was 15, and whenever she drank too much, which was easy to do, she’d become hostile and belligerent, then scarily ill, then remorseful and self-loathing, then bedridden. She hated herself! Oh, she wished she could die! Once she swallowed veronal, another time strychnine. Let me die! Nobody loves me!

They finally married in 1901. And rented a small flat near the Philadelphia Press building, where Sloan continued working noon till eight, doing spot drawings and marginalia, and big illustrations for the Sunday supplement. In the mornings he’d do a little freelance work, designing street-car advertisements or contributing line-cuts to local magazines. When he found time, he’d also do a bit of painting—portraits and self-portraits, a fortune-telling woman with her caged birds, the Philadelphia Stock Exchange, using a safe dark palette. Full color was still too risky for someone who’d worked so long in India ink.

And Dolly—Dolly was a cheerful, passionate, supportive wife. Except when she drank. And then Sloan would return home from the paper to find her weeping. Or missing. Or, worst, scrambling eggs for a perfect stranger, a man who’d go pale the moment he saw Sloan step through the door, then grab his hat and coat, and flee.

Think of your wife as a game leg….

Around the turn of the century, news-service chains—the Associated Press, McClure’s, the Hearst outfit—had begun supplying newspapers with press-ready Sunday supplements, and when the Philadelphia Press subscribed to one in 1904, John Sloan found himself out of a job. It was finally time to throw his natural caution to the wind and join his friends Glackens, Shinn, Henri and Luks in New York. He was 32, Dolly was 26.

They briefly subletted a studio in the Sherwood Building on Fifty-seventh Street, then moved downtown to Chelsea, where the rent was cheaper. They ate a lot of navy beans, a lot of sticky spaghetti and cut-price day-old bread. But for John Sloan, the excitement was worth the hardships. Freed from an office job, for the first time in 14 years, his time was suddenly his own, to budget however he chose.

He could—and did!—paint in the mornings when the light was clearest, then stroll around town in the afternoons, seeing whatever happened in front of his face. New York was a place of constant delights. He found glamour in the Tenderloin, even in the downtown tenements. He strolled past department stores, mansions, hotels; he stood on the elevated train platforms, the subway platforms, and sat in Madison Square, watching nursemaids and bums and political orators. Often, he’d pick out someone to follow—an old woman into a five-cent store, a derbied man into a billiard parlor, children into a penny arcade. Sometimes his eyes ached from so much looking.

While Sloan took his long walks or worked in the cramped studio, Dolly tended the flat, did the marketing, read Maupassant. Two or three times a week, she went out with Sloan in the evening—to a table d’hote or the Café Francis if the money was tight, or to Mouquin’s if a check had arrived in the morning’s mail. (It was primarily Glackens, Butts Glackens, already established as a magazine and book illustrator, who’d helped Sloan get started in New York as a freelance artist, suggesting editors, giving him tips on how to prepare a portfolio, arranging interviews, occasionally steering some work his way.)

But Dolly was never comfortable with Sloan’s friends, or their wives. Especially the wives. Among them she felt uneducated, uninteresting—untalented. Edith Glackens had studied art with William Merritt Chase, Flossie Shinn had gone to the Pennsylvania Academy, Linda Henri was an accomplished portrait and landscape painter. Everyone was always talking animatedly, excitedly, knowledgably about art, artists, critics, galleries. Impressionism, luminism, Twitchman, Manet, Eakins, Kenyon Cox—but to Dolly it was all a big stew, so much balloon juice. When she got too bored, she’d start drinking heavily, and Sloan, alarmed, would feign tiredness and take her home.

Next morning, she’d be ashamed of herself, breaking into loud sobs or sitting forlorn over her sewing. Sewing! She hated sewing, she was no good at sewing. Sloan would take her into his arms and tell her don’t be ridiculous, you sew beautifully—even though his shirt buttons never lined up properly on the placket.

Every few months, Dolly (depressed, touchy, insomniac) would announce to Sloan that she was homesick, and promptly return to Philadelphia by herself, for a weekend, sometimes for a week, sometimes much longer. She often wondered aloud if Sloan preferred it when she was gone. Did she embarrass him? Did he hate her? Did he?

And taking her by the arm, Sloan gaily escorts her home.