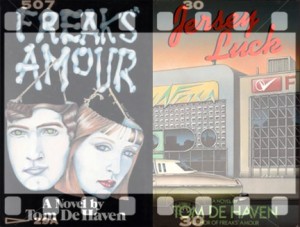 Only three works of mine, alas, have ever been optioned for the movies: “He’s All Mine” (one of the novellas in Sunburn Lake) was optioned in the late 1980s by the actress and director Anne DeSalvo; Jersey Luck was optioned, also in the late 1980s, by producer Jonathan Brett and director Susan Seidelman; in the early 2000s, it was briefly optioned by a small New York-based production company whose name escapes me (and I can’t find the contracts: no matter). Freaks’ Amour was optioned half a dozen times since its publication in 1979, most seriously–meaning there was more to it than just a check involved, there was at least some development–by Ray Stark Productions at Columbia Pictures in the early 1980s, and, in the early 90s, by the director Alex Proyas and the producer Andrew Mason for Mystery Clock, an Australian film company (Alex and Andrew are both Australian). The actor Ed Asner once tried to option Derby Dugan’s Depression Funnies, but his best offer was $1000 for an 18-month option, and despite my fondness for the “Mary Tyler Moore Show,” I turned it down.

Don’t bother running to IMDB: no movies were ever made. Nevertheless, the two times I was actually hired to write film scripts based on my novels were some of the best experiences I’ve ever had as a writer; hell, as a person. For over a year, I worked with Susan Seidelman on Jersey Luck, and for over two years I worked with Alex Proyas on Freaks’ Amour. Wonderful, delightful, super-smart people, and a joy to be around. (Plus the money was really good!) Both Alex and Susan taught me how to think in pictures, in short, dynamic, uncluttered scenes, and I’m very grateful to both of them for that; my prose fiction was forever changed–for the better, I think; I hope–by having written film scripts under the tutelage of such talented people. 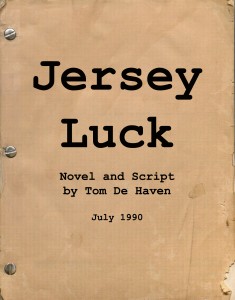