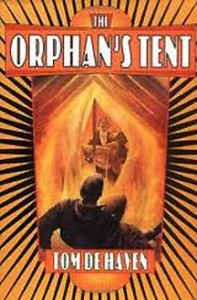 The third, and last, of my Young Adult novels, The Orphan’s Tent is also the final project I did for the book broker Byron Preiss. (Although my comics adaptation of Raymond Chandler’s Goldfish was published later than Orphan’s Tent, it was commissioned and written years earlier.)

The novel, a fantasy adventure, includes several moody black-and-white illustrations by Christopher Bing, and was published in 1996 by Atheneum Books. If I had an editor there, I don’t recall his or her name; except for the King’s Tramp series, published by Bantam Books, not much of the work I did for Byron was “edited.” I’d hand in the manuscript, and then some months later, get a wad of uncorrected proofs in the mail to read through and make corrections. It was all very…casual, which isn’t the best way to put books out into the world, but on the other hand, the stuff was indisputably and purely my own.

Thinking back on this particular book, a couple of things come to mind.

Since the mid-1980s, I’ve been keeping a notebook of possible story titles, most of which I’ve never used and never will—phrases excerpted from song lyrics, or a half-line from some prose fiction I read that has a certain ring, or small (usually two-word) phrases that just pop into my head, or disparate words–noun/adjective, noun/noun–that, for kicks, I’ve bumped together to see what they sound like or suggest. That’s the genesis of the title The Orphan’s Tent.

I once watched a television documentary about the Depression-era Orphan Trains (trains that took impoverished city kids during the 1930s to live in the American heartland when their parents could no longer afford to keep them), and started adding adjectives and nouns to the word “orphan.” When I slid “tent” behind it (God knows why!), I thought it sounded evocative, and wrote it down in my titles notebook. I had no idea what kind of story the title might go with, but so what?

Soon after I moved from New Jersey to Virginia in 1990 to teach creative writing at a university in Richmond, I felt I needed another literary agent. Since 1984, I’d had three, and none of them had worked out for me, or I hadn’t worked out for them, and I wanted a fresh start, new representation. My friend Chris Rowley, who was publishing sf and fantasy novels, had found an agent he liked, Donald Maass, and suggested I contact him. I did, and over the course of a single telephone call, he agreed to represent me and I agreed to let him.

Because he’d liked my King’s Tramp fantasy series (I’m pretty sure it was the only thing of mine he’d read), Maass expected I would continue to write similar novels. But I’m just not that kind of a writer, I’m all over the map; it’s what’s kept me interested in making new books for well over 40 years, although that sort of promiscuity doesn’t make for a healthy career. Readers and critics prefer it when a writer sticks to one kind of fiction, or genre: he’s an historical novelist, she’s a crime writer, he’s a techno-military specialist. You know?

Anyhow, Maass wanted me to work up a proposal for another multi-book fantasy series that would please the readers I’d found with Walker of Worlds and The End-of-Everything Man. (The third novel in the series, The Last Human, hadn’t been published yet.) But I just wasn’t interested. I’d spent three years writing those books. I wanted to write something different, so I did a proposal for a stand-alone novel called The Orphan’s Tent. While the story I came up definitely had fantasy trappings, it wasn’t heroic fantasy, and any magic was marginal; the protagonists, who wielded no swords nor cast any spells, were a brother and a sister, about 20, 21 years old, who owned a struggling music store and produced cd’s for local bands; it was a rock–and–roll fantasy novel. The plot revolved around the disappearance of a gifted (but naturally troubled) female singer. It seemed like a fun project, and I’d got the idea for the milieu, and a lot of background, from a friend I’d recently made who owned a little music store specializing in post-punk and metal.

Donald Maass, in our next phone conversation, told me in no uncertain terms that my proposal was shit, and that I was to dump it immediately and write something commercial. When I said no, and then suggested that our relationship probably wasn’t going to work, he went ballistic; I’ve never been dressed down, before or since, with such, uh, vigor. He accused me of having no professionalism, no loyalty (loyalty? I’d talked to the guy exactly twice). He predicted that my career, such as it was, was over, that I’d never been anything special to begin with, and that he’d taken me on a client only as a favor to another, producing client. Then he hung up. (Donald Maass, by the way, went on to publish Writing the Breakout Novel, Writing the Breakout Novel Workbook, and The Breakout Novelist. Guess I wasn’t breakout material. C’est la vie.)

I decided not to seek further representation, and for the next six years handled my own business affairs and contracts (for good or ill, usually for ill).

This is all to say that I had a story (and a title!) fairly handy (in a file, in a drawer, somewhere) when Byron Preiss called, in mid-1995, to ask if I’d be interested in writing another YA novel for him. (I was also working on Derby Dugan’s Depression Funnies at the time.)

That’s the first thing that comes to mind, thinking back on The Orphan’s Tent. The Donald Maass misadventure.

The second thing concerns the physical setting of the novel—Richmond, Virginia. Although I’d lived there for half-a-decade by the time I started writing The Orphan’s Tent, I’d never set any of my fiction there. To me, the setting, the environment is crucial to create a story’s verisimilitude and to put its characters into a meaningful context, but I still  didn’t feel that I understood Richmond. Jersey City I understood. New Jersey? Knew it well. New York City? Ditto. But Richmond? Richmond, Virginia, I still didn’t know, not really. I didn’t feel that I understood the different vernaculars, the attitudes, the undercurrents, the culture, the subcultures, or even the geography well enough to set a long story there. I was afraid I’d get it all “wrong,” and I like to get things right, or try to.

(Over the years I’ve had a running disagreement with my writing students about the importance of place in fiction; I think it’s an essential ingredient, but many, many young fiction writers I’ve taught—graduate as well as undergraduate students—just don’t see it that way; everything in America is generic, I’ve been told more times than you could imagine, and every place is “pretty much the same.” Drives me nuts whenever I hear that. Nuts, I tell you!)

In the original  proposal I wrote for Donald Maass, The Orphan’s Tent was to be set entirely in New Jersey—in a town loosely based on Frenchtown on the Delaware River, and in different areas throughout Hunterdon County. (Before it was over-developed, like the rest of Jersey, Hunterdon County was a strange, spooky, unearthly place, large rural tracts of it were, at least; if you want to read a really great horror story set in the “old Hunterdon County,”  read T.E.D. Klein’s 1972 novella “The Events at Poroth Farm,” which appears in the Library of America’s American Fantastic Tales, Volume II.)

But once I’d agreed to do the novel for Byron Preiss and Atheneum (I had to change some plot, story, and character elements to make it a proper “YA novel,” but not very many), I decided I’d set at least part of the story in Richmond and out along Route 5 which connects Richmond with Williamsburg, and where there are antebellum plantations on the James River. I had to write about Richmond sooner or later, for God’s sake, and this seemed an ideal way to break my insecurity block: my characters, all Jersey kids, would drive down to Richmond looking for their gone-missing friend; I could write about the city and its outskirts from that “newcomer” perspective, which would save me having to narrate from omniscience. They didn’t know the place, and neither did I. It worked, I think, getting me past any lingering neuroses I’d had about “writing Richmond.”

Although… in the twenty year since then, I’ve written pretty sparingly about the area. A few sections of Dugan Under Ground are set in a Richmond hospital room, a short-story in Richmond Noir takes place in Richmond’s Manchester district; a first-draft of a novel (and ghost story) called “The Unlighted Place,” is partly set near Charlottesville, and “Standard Six,” my long-gestating (read: maddeningly unfinished) trilogy of novellas is set entirely in Chesterfield County, just south of Richmond, where I lived until recently. (You can read those incomplete novellas at the “In Progress” section here at Cafe Pinfold.)

It’s not that I have anything against Virginia; in fact, except for its too-often loony politics, I like it a lot, and haven’t felt like some clueless outsider for many, many years. I wish I had written more fiction set there (here), and still hope to. I’m not sure, frankly, what the “problem” is, if in fact there is a problem. I’ve never known what will spark my imagination, or elevate my excitement high enough to devote hundreds of hours to a particular story, or group of characters. It’s a mystery, that’s all–a mystery. And whatever that mystery is, so far it hasn’t often sparked me or excited me sufficiently enough to set much fiction in Virginia, or to make up many Richmond-based characters. I’m sorry about that, but you get what you get, you take what you get, and just go with it.

At any rate, those are things that come to mind thinking over The Orphan’s Tent…