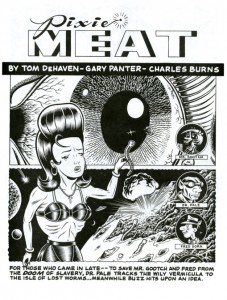 The other night I googled “Pixie Meat,” to refresh my blurred memory about this limited-edition art book (published by Water Row Press, Sudbury, Massachusetts) that showcases a portfolio of pen-and-brush jam-drawings by Gary Panter and Charles Burns, to which I contributed several short blocks of text that today would be described as “flash” or “micro” fiction, terms not in use back in 1990. I’d forgotten just how many copies were printed (by letterpress, assembled by hand), but a number of websites I visited assurred me the number was 226; of those, 200 were numbered and signed by the three of us. I wasn’t surprised to discover a few copies for sale online, nor was I surprised by the asking price: none was being offered at less than $500. (Each of us was “paid” in contributor’s copies; I don’t know how many Gary and Charles got, but I got a generous ten; I’ve given away several as gifts over the past almost-25 years, but I still have four, and those I intend to hold on to.

Pixie Meat (the phrase is such a Panter-ism that I’d lay money that Gary coined it; what the phrase means I have no idea, and never did) measures 12×15, with heavy black folio covers and a Velcro seal; the black-and-white drawings are reproduced crisply, perfectly, the text is hand-lettered, and there are several inserted pages of deliberately cheesy red cellophane. It’s a beauty, that book, a weird retro beauty; an artifact of late 80s art-cartooning, and something I’ve always been proud of having had a hand in, even though my contributions probably took no longer than a few hours to produce.

I’ve known Gary for about 35 years now; Charles, for about 30. Shortly after my first novel, Freaks’ Amour was published, Gary telephoned me from Los Angeles (I think that’s where he was living); there was no need for him to introduce himself: I knew his work—he was already well-known by then in graphics and alt-comics circles for his seminal (and as it would turn out, hugely influential) “mark”-heavy, slashing punk-art. He’d called to ask in his soft, Texas-inflected voice if I would give him permission to draw a short adaptation of my novel for an upcoming issue of an underground comic book called Young Lust. Of course, I said; he thanked me and hung up, and I didn’t hear from him again till the comic book came out and he sent me a few copies. (His adaptation consisted of just one scene, but it’s so damn good, so visually bold and frightening, that it’s been reprinted several times since then, most recently as a “bonus feature” in the trade paperback graphic-novel version of Freaks Amour that Dark Horse Comics put out in May 2013.)

Gary moved to Brooklyn in the early 1980s, and I got to meet him shortly after that at a launch party for an oversized Jimbo collection (the one with the plain cardboard covers) published by RAW Books and Graphics, Art Spieglman’s and Francoise Mouly’s publishing company. It was, in fact, on account of Gary Panter that eventually I was introduced to Art and Francoise, and to Charles Burns (most famously the creator of Black Hole, and the man with the most sensuous brush stroke in comics), as well as to most of the other RAW Magazine contributors.

(I vividly recall that the evening The Simpsons premiered on TV, Gary, Art, and Francoise were at the house in Jersey City where I was living with my wife and young daughters: one of those little memories that continue to amuse and give pleasure the older I get. And I remember that for half an hour all of us tried to keep our attention focused on the cartoon backgrounds—on the framed wall pictures, in particular—since Matt Groening had told Charles Burns who’d told Art that the animators had kept sticking in pornographic images there, and nobody was entirely sure they’d all been identified and eliminated. No, we didn’t spot any.)

Gary and Charles actively collaborated on the Pixie Meat drawings; I simply was given Xeroxes and a rough character count. What I did with each individual drawing or double-page spread, I laid it down in front of me on my desk—or tacked it up on my office wall—and just stared till some vague narrative line, or just as often, a euphonious, but mysterious, phrase slowly nudged its way into my deliberately-kept-blank mind; I’d nurse the phrase till it suggested another. (I still play this game from time to time—with art postcards, usually—either strictly for fun or because I’m blocked and could use a few minutes of free-associating to unblock.)

Doing that project with Gary and Charles was such a kick, such a privilege, that I wanted to write something longer for them, something more narratively ambitious, but neither has ever needed a writer; they’re both superb writers on their own. Somewhere around the turn of the century, I scripted a one-page comic strip that Gary drew and which was published in Esquire, but I never worked with Charles again.

I rarely see either them anymore, and if I do, it’s almost always at a comics convention (usually SPX, in Bethesda, Maryland), when they’re ensconced behind either the Fantagraphics or the Drawn & Quarterly table, autographing new books. But even so, we’ll find a way to talk for a few minutes, to manage a quick catch-up. But we never, ever mention Pixie Meat. I wonder if they remember its creation as fondly as I do. Next time, I’ll ask.