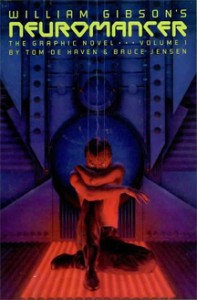 Although I’ve done a fair amount of comics scripting over the span of my career, I wish I’d done a lot more. Whatever imaginative talents I have are well suited to the medium. Probably—no, certainly—they’re better suited to writing comics than they are to writing novels: whenever I make up things, I begin by seeing pictures in my mind, a cascade of images. Every step of the way, I visualize my stuff. Often, I doodle it. Sentences don’t come for a long time.

Raymond Chandler said there are two kinds of writers, those who write writing and those who write stories; I write stories. I’m a storyteller, primarily—that’s been my joy. It’s what keeps me going. I love making up characters, making up scenes, making up stories. I take pride in crafting a good sentence, a good paragraph, and enjoy selecting what I hope are the perfect words, creating rhythms, finessing euphony, but what gives me, and always has given me, the biggest aesthetic jolts are creating a scene—the tone, the action, the small gestural beats, the dialog, the characterizations, the dynamics of a scene—that somehow pops to life on a page. I want readers to fully experience every scene that I write as if they were actually there, there in the office, there in the living room, there in the car, there on the street. And for that to happen, my prose has to be absolutely dead-on right. Which takes me, it feels like, forever to accomplish, and I’m afraid that I fail nearly as often as I succeed. 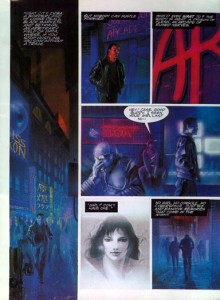 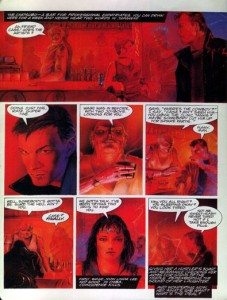 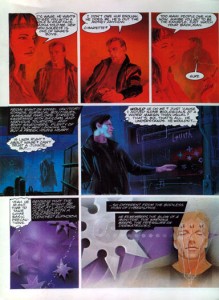 On the other hand, whenever I write a comics script, the expository prose needs only to be descriptive and clear, not perfect, not even artful, and nowhere near luminous. The coherent, logical-but-surprising progression of pictures, of images, of action is what’s important. A script is a blueprint, it’s a means to an end, never the end itself—I’m writing for the artist, for my collaborator. I can focus all of my ambition and creative energy on the story. Putting together a comics page—visualizing a page of comics—is akin to solving a puzzle; every piece must fit properly and precisely, causally, and because of that, for me, it’s a concrete analog to plot mechanics. And I’m particularly fond of plots. 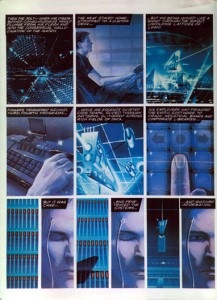 Neuromancer, which I scripted in 1988 and which was published in 1989, was my first book-length comics project, even though the length of the book was a mere 44 pages; it was also my first “graphic novel,” even though it contained only half the story. It was a strange and not very satisfying experience, but I was never sorry I did it, and considering that my script was an adaptation of what even then was considered a landmark work of science-fiction—the original cyberpunk novel—I felt lucky to be involved.

William Gibson’s novel was published in 1984 and won the Nebula, the Hugo, and the Philip K. Dick awards, quite a rare sweep. At the urging of my sf-writer friend Chris Rowley, I’d read it shortly after it came out, and while I could’ve used an annotated edition (at the time I first read it, I wasn’t even working on a computer yet: “cyberspace” was a baffling conceit/concept), I found the novel amazing, and remember telling people that Gibson—whose prose is rich,vivid and sophisticated—had done something similar to what John LeCarre had done back in the early 1960s with The Spy Who Came in from the Cold: he’d both embraced and transcended genre, and written a great novel that was, indisputably, literature. 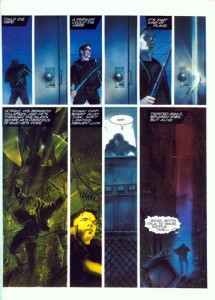 With a “look” influenced by John Carpenter’s Escape from New York and Ridley Scott’s Blade Runner, Neuromancer is about a computer-hacker named Case, a freelance “console cowboy” who downloads his consciousness into the “consensual hallucination of the matrix” and loots raw data from industrial banks and corporate libraries. After he’s caught stealing by one of his employers, he’s injected with a “Russian mycotoxin” that burns out his talent “micron by micron.” When we meet him on the first page of the novel, that damage has already been done, and Case is a spiraling-down junkie wandering the neon hell of Chiba City, Japan. Eventually he’s recruited by a “street samurai” named Molly Millions: in exchange for a regenerated central nervous system, he agrees to plunge back into cyberspace and pull off the most audacious theft of his career. Essentially, Neuromancer is a heist novel, like Topkapi or Richard Stark’s Parker books, only higher-tech.

While I was working on the project, adapting Gibson’s dense and complex work into comics form, his bleak, strobbing, groggy and dangerous vision of the 21st century—everything corporatized, monetized, digitized, mediatized, jeopardized, and utterly disposable—seemed fast approaching:  in 1988, the Soviet Union was near collapse, its satellite nations all breaking free—the Berlin Wall fell in November 1989; suddenly the Cold War was over, and ruthless Capitalism was declared not only Winner, but King. In 1988 Pan Am Flight 103 blew up over Lockerbie, Scotland, killing 258 people: a preview of many, many other state-sponsored acts of terrorism to come. In 1989, Ayatollah Khomeini condemned Salman Rushie to death—for publishing his “sacrilegious” novel The Satanic Verses; theocracies and religious extremism were on the rise. As were huge-scale ecological catastrophes: in ’89, the Exxon Valdez hit a reef in Prince William Sound, Alaska and poured 11 million gallons of crude oil into once-pristine waters, fouling nearly 1100 miles of shoreline. Prozac was first marketed. And everywhere, everywhere, simply everywhere you heard Bobby McFerrin’s song “Don’t Worry, Be Happy”: Willful ignorance was getting big. Or else irony was. Or both were. The internet was still in utero, but computers, suddenly, were ubiquitous. By 1988, ’89, nobody was asking you anymore if you had a computer; they just assumed you did, and, of course, you did. 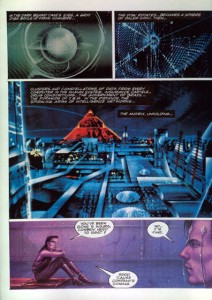 Scripting Neuromancer was one of the last things I worked on while still living in New Jersey; at the same time I was also writing Walker of Worlds, the vignettes for Pixie Meat, and a film adaptation of my novel Jersey Luck for the director Susan Seidelman. When I’d signed on to do the script, I’d had no idea who would be doing the artwork, but was pleased by the choice of illustrator Bruce Jensen, and while I’ve never been partial to painted comics, I think he did an excellent job: his compositions are noirishly atmospheric and unsettling, and his decision to color-key double-page spreads according to the overall narrative mood of a sequence was brilliant. (I was gratified that William Gibson himself seemed happy with how the comic turned out; in his introduction to the book, he called it “a very sharp job…Not only does [it] look very much like what I saw in my head, in 1983, it also moves that way. It’s probably impossible to convey exactly what I mean by this, but [the] graphic novel walks right.”) 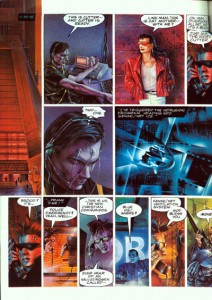 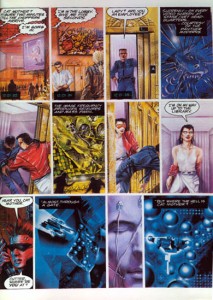 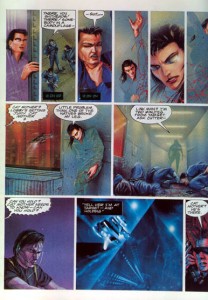 My difficulties with the project had to do with the script process that I was expected to follow: the famous (or infamous) “Marvel Method.” Epic Comics, which published Neuromancer as a glossy large-format trade-paperback, was a subsidiary of Marvel Comics, and Marvel “culture” at the time insisted that a writer initially draft a succinct summary of the story, which the artist would use in breaking down and penciling all of the pages. That meant, instead of writing a detailed panel-by-panel script, I had to write something like: “Page 1, Case is walking around Chiba City at night. Page 2, Case talks to Ratz and Linda Lee in a bar. Page 3. Linda Lee tells Case that Wage intends to kill him. He leaves the bar and walks around recalling his days as a console cowboy.” Etcetera. After working up that sort of uninflected précis—which was probably no longer than a couple of pages—I sent it off to Bruce Jensen (whom I never met, by the way, but that’s not unusual—I’ve never met half the cartoonists I’ve worked with). Jensen then did the page and panel breakdowns as he saw fit, roughing out everything, very loosely, in pencil.

Several weeks later, I got back photocopies (blurry photocopies, at that) of his pencils to script dialog and captions over. What a fucking nightmare!  Often, the pencils were so rough, so loose that I couldn’t tell who was even in the panels, what they were doing, or even if there were any props. And just as often, there either would be too many panels on a page, or too few, to create what I considered good scene flow. And since—at a much later stage—Jensen would be creating photographic collages to evoke cyberspace/the matrix, those essential panels, at the pencil stage, were left…blank; even so, I still had to write expository or dialog captions for them. I rolled my eyes and grumbled a lot, I crossed my fingers constantly, and hoped for the best. 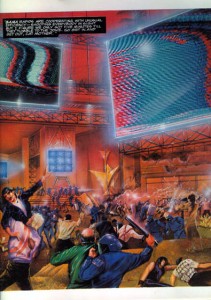 The book came out okay, I think, not bad, but it was a miserable way to work. (Every other time I’ve written comics, I’ve done full-script: for each panel of every page I’d describe the setting, the characters and the action, followed by dialog, captions, and any sound effects.)  It was because of my loathing for the “Marvel Method” that I declined the opportunity to script the second half of Neuromancer.

All and all, it was an interesting…effort.  But it could’ve been so much better.  Eh. So it goes.