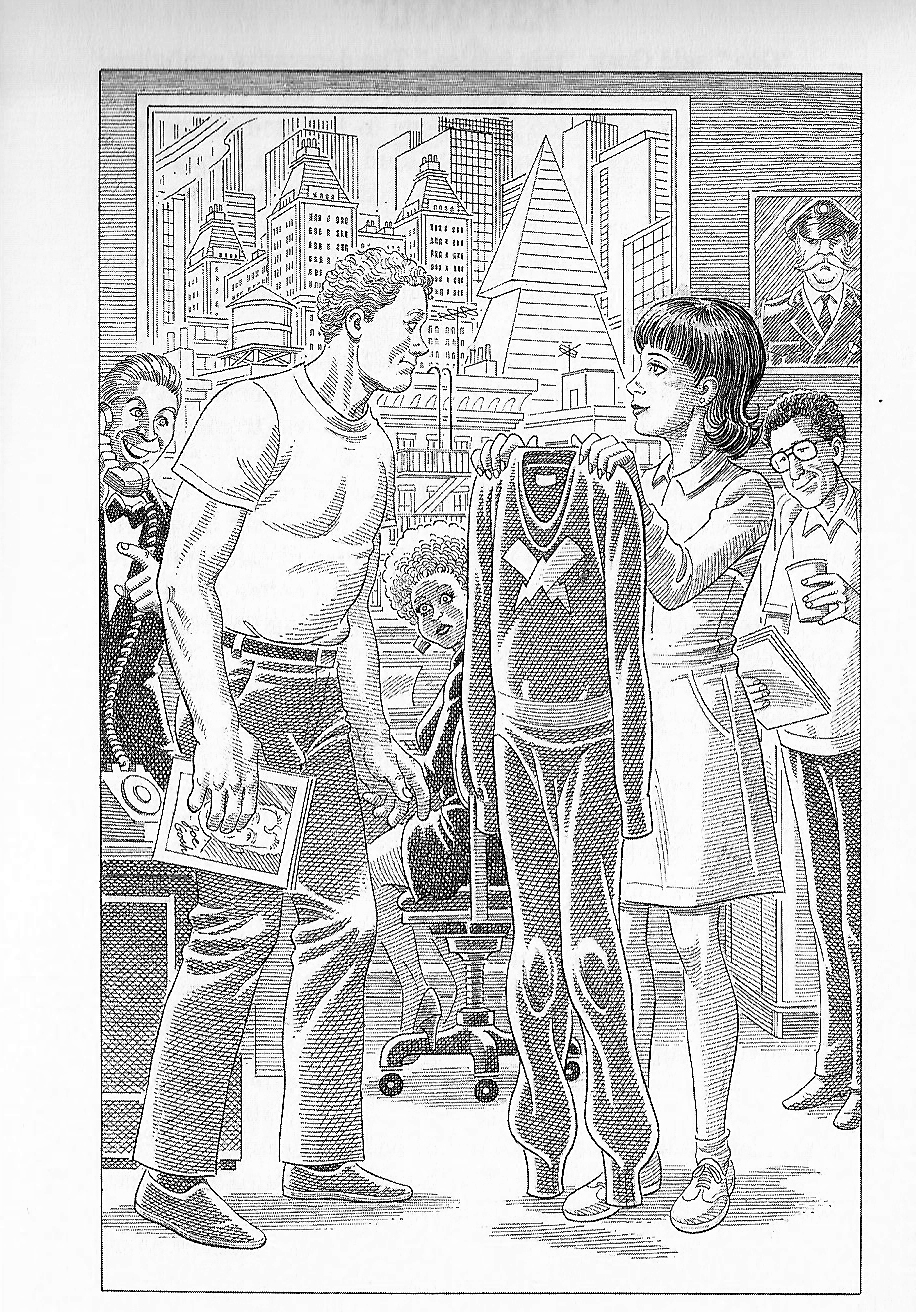 There’s a literary anecdote I’ve passed along many times in writing workshops, but, honestly, I have no idea whether it’s true or not. It concerns William Faulkner and the original inspiration, or impetus, for writing The Sound and the Fury. Supposedly “one day” he looked out his window and saw a small girl in a sun dress shinnying up a tree; her underpants were red. From such acorns, etc. It’s a good little story, pointless but good, and I mention it here only because I had a similar (well, kind of) inspiration for Joe Gosh, my second young-adult novel, published in 1988. It started with a flash, a fleeting image.

We were living in Jersey City, and had recently purchased a huge microwave oven; “one day” I came into the kitchen and, from the corner of my eye, thought I saw a pile of junk mail–catalogs and circulars and such–piled inside of it and revolving on a plate; the timer was counting down. I panicked, thinking the paper would all burst into flames, so I pulled open the oven door, but it wasn’t junk mail inside (duh), it was some big block of frozen meat being defrosted!  It was a goofy misperception, but then, a few weeks later when I was invited to contribute to a new series (“Millennium Books,” distributed by Walker and Company) of science-fiction novels for teenaged readers, I remembered that junk-mail-in-a-microwave-oven mirage, and instantly had the opening event in my otherwise unconceived new story. Eventually, I worked it into an opening sentence, substituting a television set for a microwave oven: “That Sunday evening, as Joe Gosh sat morosely watching television, a batch of junk mail tied with red-and-white bakery string appeared with a crackle above his set and fritzed the picture.”

It’s useful to put yourself in a tight spot every so often. I had no idea why that junk mail appeared over that television set (and who the heck was Joe Gosh,* and why was he morose?), but gradually I wrote my way into the story, increment by increment, sentence by sentence, and pretty soon realized that what I was talking about was a matter-transporter (of course!) and that it was called the Jeeter Jiffy. The novel was on its way.

Joe Gosh turned out to about be an average guy with super-powers; it’s a slapstick comedy, was a pleasure to write, and took about four months. I wrote it while  simultaneously working on the three linked novellas of Sunburn Lake, which also came out in ’88. In retrospect, I look at the novel as a trial-run/rough draft for my considerably longer and more ambitious novel about Superman, which wouldn’t appear for another 17 years.

With every book I’ve done, I’ve used the experience as a lab of sorts to try out some new narrative strategy or technique, something I’ve admired in another writer’s work and wanted to adapt/adopt to my own ends, or just something I’ve thought about and felt like incorporating into my storytelling or prose style. For Joe Gosh, I wanted to write in plain, uncluttered, and transparent prose, a prose cropped of most adjectives and adverbs, and as free as I could make it of the dashes and parentheticals that had become a hallmark by then of my sentences (thanks, I think, to Samuel R. Delany and especially to his novel Dhalgren).

The model for this stripped-down prose came from the early Fletch and Flynn novels by Gregory Mcdonald. The original Fletch novel (published in 1974) hit me like a two-by-four when I first read it, much the way most writers of my generation were hit by the work of Raymond Carver. His first three novels about Fletch the amoral reporter, and his two novels about Flynn the policeman who’s also a spy, contain some of the most economical but propulsive writing I’ve ever encountered; he left so much space! (The way Roddy Doyle does these days.) I’d been wanting to write with more precision and speed, all-for-the-story and nothing showy, and Mcdonald’s stuff  pointed me the way.** When the opportunity to do Joe Gosh came along, I decided, very consciously, that I was going to use it to do my version of a Mcdonald-style narrative.  It also helped that Joe Gosh would be a comic novel, since Mcdonald’s stuff was always light and winking. (His later novels got clunky and downright silly, but his early stuff! Wonderful.).

Once or twice a year, I still get emails from people who read Joe Gosh when they were in high school, and remember it fondly.  So do I.

(Ralph Reese did a batch of good and funny illustrations for the original Walker edition, and the one on page 125 includes a cameo appearance by me (circa age 38), standing doofusly in the background holding a manuscript and a cup of coffee.)

*I know where the name Joe Gosh came from, though–that’s an easy one. When I was in grammar school, we had a housekeeper who came once every two weeks—on a Wednesday afternoon—and stayed for exactly 3 hours, the last 45 minutes of which she spent having a cup of tea in the ktichen with my mother. I never did figure out what was the point, but my mom had her peccadilloes. Anyhow, the cleaning woman’s name was Mrs. Gosch, and Mrs. Gosch had a son named Tommy, but for some reason my best boyhood friend, a guy named John Richard, always referred to him as “Joe Gosh.” Tommy Gosch was one of those people who walk aggressively–giant strides, arms  swinging propulsively.  And my friend John, whenever he’d see Tommy Gosch zooming along the sidewalks of Bayonne, would grin mischievously and then, like a radio announcer, intone, “There goes Joe Gosh, G-O-S-H, a man on a mission!”

** Recently, while flipping through one of my notebooks, I was surprised to find a list I’d made of fiction/books/novels/plays that, during the first 10 or so years of my writing career, had most directly inspired me, or influenced my own thoughts/strategies about narrative and storytelling and voice, and since the first three Fletch novels and the two Flynn novels by Gregory Mcdonald were on the list, I thought I’d drop in the rest of the titles here; they’re not in any order of special importance, each of them was important in its own way:

The Once and Future King, T.H. White

Going Places; I Would Have Saved Them if I Could, Leonard Michaels

I Am Legend, Richard Matheson

A Singular Man; The Beastly Beatittudes of Balthazar B., J.P. Donleavy

The Collected Works of Billy the Kid; Coming Through Slaughter, Michael Ondaatje

The Grapes of Wrath, John Steinbeck

We Have Always Lived in the Castle, Shirley Jackson

Day of the Triffids, John Wyndham

The World According to Garp, John Irving

The Stories of John Cheever

The Killer Inside Me, Jim Thompson