(This essay is a revised and updated version of one that appeared as the Introduction to the trade paperback that collected Green Candles Volumes 1-3, published in 1997 by Paradox Press/DC Comics) 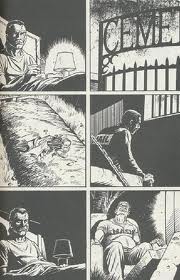 For eleven years I lived in Jersey City, and at least ten times a year I’d toy with the notion of setting a private-eye novel there. The place had (still has) all the right ingredients: mean streets and enclaves of great wealth, a cynical, and heterogeneous, population and a lively tradition of crooked politics. Once, I even got around to naming my fictional detective—“John Halting.” Before I could think of anything for him to do, though, some other story idea came along that seemed more urgent, and poor Halting languished.

Then, three years after I moved to Virginia, I got a phone call from Andy Helfer, the editor-in-chief at Paradox Press, a then-new “mature-readers” imprint at DC Comics. Andy was developing a line of serialized mystery novels in comic-book form—would I be interested, he wondered, in submitting a proposal or two? Absolutely! Though I was in no way, shape or form a “comics professional,” by that time in my career I’d scripted a couple of graphic novels and loved the work. It’s much more fun, but a helluva lot more work, than writing film scripts: don’t let anybody tell you differently. And since production costs are in the thousands rather than the millions, a writer often has a lot freer hand.

I wrote up three proposals. Andy picked the story called Green Candles—and suddenly I had my chance to write a detective novel set in Jersey City.

In the book, the setting is “Bergen City,” but that was just so I could take some liberties with geography and not get snotty letters from local residents, and have a go at city politics without being sued (or worse).

Take it from me, though: John Halting lives in Jersey City.

In fact, shortly after my script for part one of the series was sent to cartoonist Robin Smith in London, I heard from Joel Rose, my editor, that Robin would appreciate some reference photographs. So I phoned a former neighbor who still lived in Jersey City and hired her to shoot a few rolls of black-and-white film (remember that? rolls of black-and-white film?). I gave her a very specific shot list. Eventually, Robin got a batch of prints–this all pre-dated the Internet, email, and email attachments–and one of the great pleasures I took in seeing his work-in-progress was to revisit my much-missed old stomping ground in his page panels. (Robin’s cartooning is clean, clear, and bold, very reminiscent of DC Comics in the 1960s, and is especially reminiscent, to me, of quintessential Superman artist Curt Swan’s work.) The house where the character Grace Penny lives is the Queen Anne brownstone, built circa 1880, that my wife Santa and I bought early in 1979 and lived in till the late summer of 1990; the elementary school where Grace teaches, and where Halting’s daughter is a pupil, is the school my two daughters attended; the imposing building where Eddie Guinness presides as mayor is the Jersey City City Hall; and so on.

When I pitched Green Candles to Andy Helfer, I knew next to nothing about what a private investigator actually does—but that didn’t seem any impediment. Ever since the days of Black Mask magazine, most writers of detective fiction (Dashiell Hammett to the contrary) have relied on their imaginations, not their memories or life experiences, to make up stories. And why not? The private eye you meet in a novel is an American myth, an urban myth, and readers have always been in on the con. Lew Archer and Philip Marlowe never existed and never could have; same goes for Nero Wolfe, for Mike Hammer, for Kinsey Milhone, for Spencer, for Travis McGee.

The self-employed, fiercely independent, ferociously honest private eye solving murder mysteries (after being slugged and sapped and shot full of dope) is one of our more enduring fantasies, and even in our high-tech/high-snark new millennium, we continue to buy into that romantic, preposterous conceit. Good for us.

But while I was quite prepared to draft a detective story without so much as an inkling of how a bond fide private investigator operates (writers are shameless), by a weird quirk of fate, I ended up scripting Green Candle as a fully licensed P.I.

Here’s what happened: One day shortly after I’d agreed to do the mystery novel for Paradox  Press, I was flipping through a Richmond weekly newspaper when my attention was caught by a classified ad for a “Private Investigator Training Course.” There was a phone number listed and I called it. Turns out, Virginia is (or at least it was back then; I haven’t checked recently) one of the few (I think just two) states where you can become a licensed P.I. without having any previous law-enforcement or military credentials. All you have to do is take a 61-hour classroom course!

I couldn’t resist. I signed up (it set me back a measly three hundred bucks) and spent four summer weekends (eight hours a day, Saturday and Sunday) in a classroom (located above a towing-service garage) with about twenty other would-be gumshoes. One class period we took a field trip to a local gun range, where I fired a handgun for the first, and only, time in my life. I was rated Sharpshooter.

My classmates included several bar bouncers, a couple of dairy farmers, a retail-store clerk, a housepainter, three or four college students, and a businessman who’d recently sold his potato chip company for a million bucks and was bored out of his skull by retirement. Naturally, we all smoked cigarettes like mad during our ten-minute breaks. We had to! We were training to become private eyes!

I loved that course, and scribbled notes like crazy, and was heartily sorry when the four weekends were over. Along with my classmates, I took and passed the state certification test (one of the questions—I swear!—was: “Whose picture appears on the five-dollar bill?”) then I paid my seventy-five bucks and got a Virginia P.I.’s license, issued to me by the Department of Motor Vehicles.

Naturally, I showed it to everyone I met.

I began scripting Green Candles while I was “in  training” and finished it after I was fully licensed. 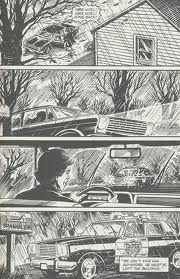 And yes, the story I wrote, while still a “fantasy,” in the pulp tradition, was definitely informed—and improved, I hope—by certain things I learned in my “private-investigator training program.”

For one thing, when John Halting tells his daughter that “Real cops don’t like it when you call yourself a detective”—that’s an exact quote I plucked from my class notes. And the episode that opens the novel is based on a story our instructor told in class.

Oh, in case you’re wondering: no, I never used my license for anything other than to impress my friends and relatives. (At least I think I impressed them.)

“So where do you get your ideas?”

Here, there, everywhere—but never from newspapers or magazines.

Except in the case of Green Candles.

By a strange coincidence, both Vanity Fair and The New Yorker ran long articles in the same month in 1993 about “recovered memory syndrome” and “Satanic cults,” and by an even stranger coincidence I happened to read them both. The Vanity Fair article pretty much supported the idea that devil cults were real and so were recovered memories; The New Yorker article (which later appeared as a book called Remembering Satan) took the opposite position.

Shortly after I’d read both pieces, it occurred to me that here was material for a novel. (Incidentally, the green candles motif is swiped directly from something mentioned by an interviewee in Vanity Fair: credit where credit’s due.) I started doing a little independent reading about recovered memory, and began developing my own opinions on the subject.

Around that same time, Andy Helfer first contacted me, so it seemed natural to develop the material for a mystery story. In the twenty-one years that have passed since then, recovered memory syndrome has ceased to be a hot and controversial topic, and because of that, my plot may seem a lot less “cutting edge” that it did back in ’93. But that’s all right by me, quite all right. The phenomenon scared and depressed me, for a lot of reasons, and I’m happy it disappeared from tabloid television and American courtrooms.

From time to time, though I’ve wondered if that cultural disappearance was the reason why Green Candles never was optioned for a film; I’m pretty sure it was the only title in the Paradox Graphic Mystery line that wasn’t; two books in the series—Road to Perdition and A History of Violence—actually were made into very successful films. 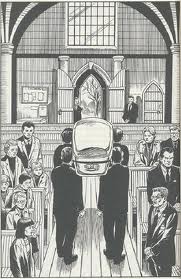 A few years ago I got a semester’s release from teaching to work exclusively on my fiction. What I decided to do during those deliciously free eight months (summer vacation and fall semester) was to write first-drafts of a number of story ideas that I’d roughed out in notebooks. Ended up, I drafted four novels and a collection of novellas. One of the novels was another (but the first prose) John Halting murder mystery. With any luck, I’ll get back to it, and revise it, one of these days.