My first novel, Freaks’ Amour, was published simultaneously in hardcover and trade paperback (one of the first, if not the first, in the Quill paperback line) by William Morrow in February 1979, a month before the partial meltdown in one of the nuclear reactors at Three Mile Island, and three months shy of my thirtieth birthday. Morrow also published Sophia Loren’s autobiography that February, and although her book, naturally, was where most publicity and promotion were focused, the company didn’t scant me or my novel: I can vividly recall seeing it displayed in the front windows of both Scribner’s and Brentano’s bookstores on Fifth Avenue in New York City. I’ve never had that experience again. It was edited by James Landis and Maria Guaranaschelli at a time when manuscripts were thoroughly, even finically gone over and over, and then gone over again; in fact, both Jim and Maria set aside two full days for me to come into their Manhattan office on lower Park Avenue and read through the final draft with them line by line. I’ve never had that experience again, either.

Although published as a mainstream novel, Freaks’ Amour is actually a near-future fantasy (the premise, frankly, is too impossible, even nutty, ever to be considered science fiction) about the mutated survivors of a nuclear accident in Jersey City, where I was living then. When I started writing the novel, however—in the first floor apartment of a house on West 39th Street in Bayonne while listening constantly to Keith Jarrett’s Koln Concert—it was a completely different thing. Originally, it was about two people in the pornographic film industry.

After I got an MFA in creative writing from Bowling Green State University in 1973, I returned to New Jersey from Ohio hoping to find work as a magazine or book editor. The only job I was offered was as an assistant editor/staff writer for a line of men’s magazines (Sir!, Mr., and Man to Man) published by Adrian Lopez, a charming and debonair gentleman who suffered periodically from shingles and worked behind his massive desk for weeks at a time without a shirt on; his son is the writer Barry Lopez. Adrian’s company published dozens of different monthly and bi-monthly magazines—besides the men’s stuff, there were women’s magazines and sports magazines and cartoon digests, etc.—out of a three story building on West 26th Street, just off Broadway. I worked there for three happy years with a bunch of old-school editors, including the wonderful Everett Meyers, who taught me everything there was to know (then) about magazine editing and publishing.

Although my primary responsibilities were to read slush, answer the mail, answer the phone, copy-edit fiction and non-fiction, pull blurbs, and lay out the “backyards” (using Xeroxed repros, scissors and Scotch tape, making sure everything fit and leaving room for the cheesy ads), I also had to write what was called “girly copy,” the full-of-baloney bios of the naked women who graced at least half of the pages: “Beautiful Darlene hails from Columbus, Ohio, and is currently working on her PhD in nuclear medicine…” 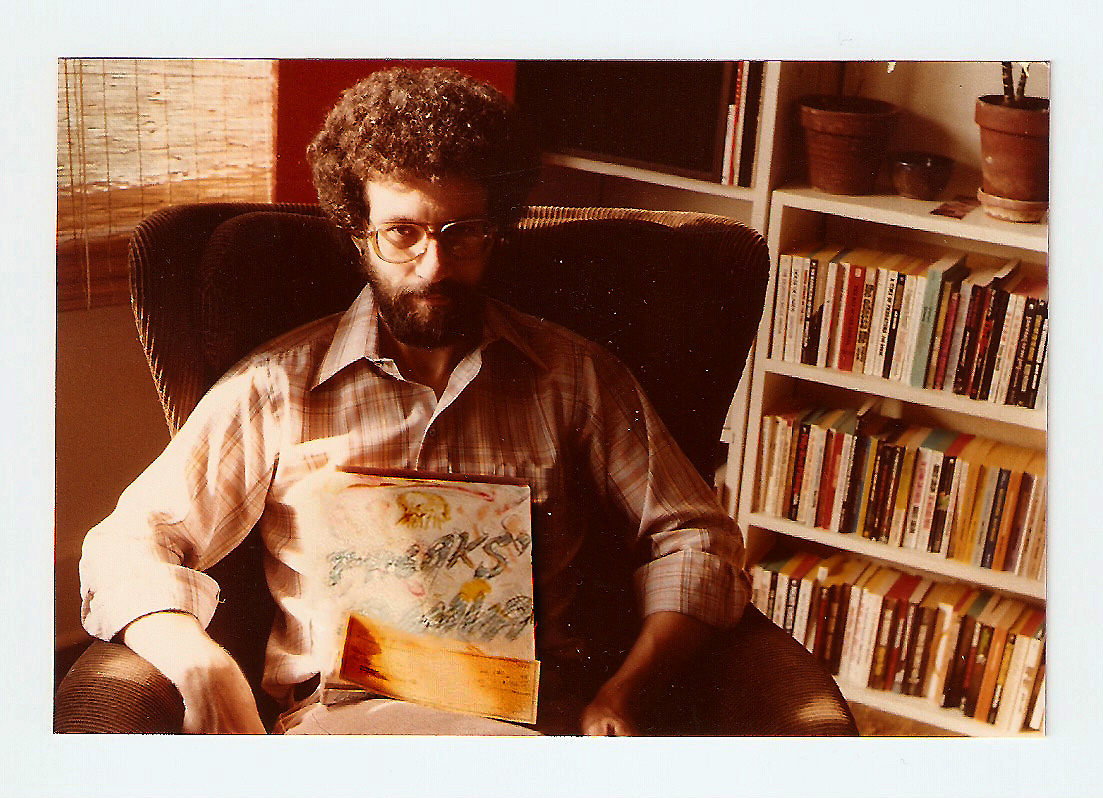 That’s me, in September 1977 when I was 28, holding the check from William Morrow and Company for the first installment–$2500–of the $5000 advance for my debut novel, Freaks’ Amour. The novel itself, which was far from finished at that time (I’d only written 100 pages), wouldn’t be published for another year and a half. I don’t know why I don’t look happy in the picture, I’m sure I was.

This was at the same time “Deep Throat” became such a big hit, when feature-length X-rated movies suddenly were hip and trendy, when actors like Linda Lovelace and Marilyn Chambers, the former Ivory Soap girl, became national celebrities. Often I was sent out to write about all of this stuff for the magazines, and on several occasions I hung around a Bowery loft where a porn film was shot over a Saturday and a Sunday. I interviewed the actors and the directors and the tech crews (once I was mistaken for a performer and asked what the hell I was doing still in my clothes: that was very nice, indeed), and eventually I thought, well, this could make the basis for a very cool novel. Whenever I felt I had the chops and the courage to try writing one.

After several months of writing on an Olympia typewriter that weighed about as much as a ship’s anchor, I had 100 pages, with no idea whatsoever where the novel was going. No matter, I sent the manuscript to Craig Nova, and within a week got a phone call from Francis Greenburger, who ran the S.J. Greenburger Literary Agency in New York; he wanted to represent me. Another true story. (But I swear, it’s the last Cinderella story of my writing career.) Before I even had time to go into Manhattan and meet Francis, he’d sold the partial manuscript to Jim Landis at Morrow. For an advance of $5000: $2500 on signing, $1500 on delivery of the finished manuscript, $1000 on publication.

I reread the novel again just about two years ago, after not having so much as glanced at a page of it in more than twenty, not since the last time I’d been hired to adapt it into a film script. Strange, unnerving experience to read the work of somebody who was “me” at the age of 27, 28, a guy whose mind I could barely remember, whose narrative flaws I pounced on with exasperated groans, and whose energy and drive I envied like crazy.

(A briefer version of this essay appears on the VCU Cabell First Novelist blog:  http://wp.vcu.edu/firstnovelist/category/500-words/)