(Since I consider Chronicles of the King’s Tramp to be one long novel released in three installments—Walker of Worlds, The End-of-Everything Man, and The Last Human—this essay will cover the entire project.) 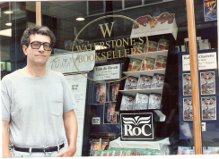 This photo was taken by my wife Santa outside a Waterstone’s bookstore in either Bath or York, England, in August 1991 during the “Roc Roadshow” book tour to promote the British editon of Walker of Worlds.

I’ve always harbored mixed feelings about Chronicles of the King’s Tramp, the fantasy/adventure trilogy of novels I wrote between 1989 and 1992 and that was published simultaneously in hardcover and trade paperback editions by Bantam/Doubleday/Dell under, initially, the “Foundation Book” imprint and, later, the “Spectra” imprint. The series was brokered by Byron Preiss, and edited by Lou Aronica and Betsy Mitchell.

Eventually I’ll get to my lingering negative feelings, but let’s start with some things about the project that I recall with pleasure and satisfaction. For one, my daughters Jessie and Kate, who were 10-13 and 8-11 during the time I worked on the novels, made up or “found” (on license plates, billboards, road signs, middle-school teachers, even a Richmond, VA. grocery-store chain) the names for most of the characters living in the medieval world of “Lostwithal,” and for another, doing the series was directly responsible for my meeting, and going on a book tour of England and Scotland with, Neil Gaiman, just at the point when his great Sandman comic-book series was kicking into high gear. 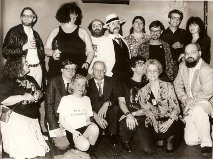 American and English sf and fantasy authors at a party in a Covent Garden, London nightclub to launch the Roc Books imprint as well as the Roc Roadshow book-tour. That’s me on the far right in the tinted glasses and black shirt, and that’s Neil Gaimin kneeling in the front row, whispering in a woman’s ear. Photo by Susan Greenhill.

For yet another thing, I’ve remained stubbornly proud of the strategy I concocted for Book Two (The End-of-Everything Man, 1991) to recap the fairly complicated storyline from Book One (Walker of Worlds, 1990): in the first chapter I had one of my heroes be interviewed about those “previous events” on an afternoon talk show; maybe other writers of multi-novel series lit upon the same device before I did, but if so, I never saw it. I’m also proud, though not quite as proud, of the recap strategy I used for Book Three (The Last Human, 1992): one of the characters keeps a “journal” written on the backs of  blank checks—useless blank checks since he’s no longer living on earth, but in an alternative reality. The best thing of all, though? The characters. I loved the characters, a lot–loved having them live in my head for three years, loved sitting down every day at the computer and just…letting them go. A story never “writes itself,” but when characters have the kind of reality for a writer that this bunch did, it can seem that way.

But whenever I remember the period in my life when I wrote those novels, the first two especially, I’m always touched by sorrow and recollected anger, and feel pangs of loss. I think of Walker of Worlds, for example, and what I immediately think of is—AIDS, and the many friends, neighbors, and colleagues who were dying, who died, while I was working on the manuscript. And I think, too, of the concurrent epidemic of homelessness, especially in New York City, where I spent much of my time in those years. (The makeshift City of the Homeless in Walker’s imaginary Stephen Crane Park is based on one that I saw extemporized and then brutally destroyed by cops in the East Village.) And I think, bitterly, about crack cocaine and the daily havoc it brought. Three crack houses “opened” in my neighborhood in Jersey City in the late ’80s, and afterwards, ordinary life became less and less tenable. Scarcely a month went by that we didn’t find our car broken into; having replacement windows installed became as regular a thing as paying the gas-and-electric bill. Our house, as well, was broken into, and ransacked, and I still feel a sharp bolt of terror remembering the day—a day I’d spent working on The End-of-Everything Man—when  I had to yank my two daughters out of their plastic wading pool and run them into our house because a crackhead gunfight erupted suddenly in the street, not thirty feet away.) It was a hellish time, the late 80s, early 90s, when everything seemed—felt—was—broken.

It was also a bad time in my career. I signed the contract for the King’s Tramp series roughly ten years after I’d signed the contract for my first novel, Freaks’ Amour, but despite having published, throughout the intervening decade, several widely-reviewed novels, as well as a YA novel, a graphic novel, assorted comics, book/music/film reviews, the script for a video game, and a column for a monthly magazine (GoodLife); despite having written episodes for an animated-cartoon TV show (The Adventures of the Galaxy Rangers), and having worked with director Susan Seidelman on a feature-film script (based on my second novel, Jersey Luck), by 1988, ’89 my career was a real mess. None of my novels had sold especially well, and I’d bounced from one publisher to another, one editor to another, one agent to another—in nine years I’d had three different agents, and when I signed the King’s Tramp contract, which I did primarily because I needed the money, I no longer had professional representation. Which explains not only why I sold myself so cheaply (my advance for the three books in toto was considerably less than $20,000), but also why I agreed to an insane completion schedule: I promised to deliver a novel of no less than 100,000 words every nine months till the trilogy was finished. No reputable agent would’ve let me agree to that. (Well, I like to think not, anyhow.)

But as discouraged as I was about my career, my imagination, thank God, never let me down—until, that is, mid-way through The Last Human. By then, my family and I had left (pretty much fled) Jersey City and moved to Virginia so I could take a university teaching job and, for once, have a dependable income. Acclimating myself (slowly, I’m afraid: I’m a Taurus) to a new life and new surroundings, struggling to become comfortable with my disorienting role as a tenure-track “professor of English,” (I felt, in that capacity, like a total fraud), and meanwhile writing fiction every single night from 8 or 9 o’clock till 2 or 3 in the morning, chronicling the adventures of Jack, a Walker and his companions and adversaries, I finally crashed, physically and mentally exhausted, and for the first, and so far the only, time in my novel-writing career, I settled for “good enough” just so I could be done.

As a result, the last novel is weak, and if not an absolute failure, close enough that it still makes me wince. I begged my editors for an extension—just let me take a break for a couple of months, then come back refreshed and do a proper job; let me end the trilogy at the top of my game, please! But the prevailing wisdom then was that fantasy-readers demanded a new book from a writer every year, and I gave in. The Last Human isn’t bad, it’s just not good (and the other two, in my opinion, are very good). It resolves the convoluted plot, it ties everything up, but it simply doesn’t have the right level of energy or invention. Which kills me. To this day, it kills me. It’s the least favorite of my books—and I even despise the title. I wanted to call it Queen of Noise. But someone at Bantam, some “wag,” said it sounded like something Jackie Gleason would’ve called Audrey Meadows on a “Honeymooners” episode. I conceded the point. (And by the way? My original title for the series was Chronicles of the Mystery Tramp, “mystery tramp,” of course coming straight out of Bob Dylan’s “Like a Rolling Stone.” I never even realized that the series title had been changed till I saw the galleys for Walker of Worlds.)

The mid-1970s through the early 1990s can, I suppose, be considered a golden age for fantasy novels, especially series novels; they certainly sold in big numbers—even the King’s Tramp series (Walker of Worlds especially) sold well—decently—in the U.S., and in Europe, too. (That’s why I was sent to England and Scotland on that group book tour, where I met Neil Gaiman. He was on the tour, as well. Nice guy.) Of the many books I’ve published, the ones that earned me the largest royalty checks (and, alas, they weren’t all that large) were the Jack, a Walker/King’s Tramp books.

Truth be told, though, I wasn’t (and still am not) a reader of heroic, or high, fantasy, meaning stories set in medieval-type worlds where “magic works.” When I was first approached and asked if I’d be interested in working up an outline for a fantasy trilogy, I said, yeah okay, but on one condition, that I didn’t have to “do dragons.” (Confession: I’ve never read Tolkien; when I was in college and everybody was devouring those Ballantine paperbacks, I tried The Hobbit but didn’t make it through five pages. Never even attempted Lord of the Rings.) But I think my ignorance of fantasy novels and novelists—and of fantasy-novel storytelling and prose strategies—was an advantage; it gives the novels a certain distinction, a certain difference. (At least it did in 1990-92.) Consciously, I decided to write the series as though I were writing crime fiction, and to keep that non-fantasy urban-staccato style thrumming in my head, I read a lot of Elmore Leonard while composing the King’s Tramp, but especially a lot of Ed McBain—dozens of 87th Precinct novels. 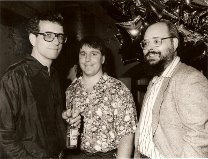 The American writers on the Roc Roadshow book-tour of England and Scotland, August 1991: l. to r. me, Bob Salvatore, and Bob Charrette. Photo by Susan Greenhill.

I almost never reread any of my published work; in fact, once it’s done and “out there,” I rarely even think about it again. But just last spring I found myself picking up Walker of Worlds and re-reading the first 50 pages or so (not bad!) and the reason I did was because of something I’d seen in a newspaper. The initial plot hook of the King’s Tramp series, the thing that kicks off the long adventure, is the amnesia that’s chemically induced in my reporter-protagonist Peter Musik; the drug, called Blue Mark (an editing term for a deletion), is being developed by a large (fictional) pharmaceutical company to treat patients with traumatic life experiences, and is intended to delete only bad memories. So imagine my surprise when I was going through the newspaper one morning and read that such a drug, a drug with the identical intended effect, is currently in development!  As a novelist I was amused, of course, that the world had, you know, finally caught up with something I’d imagined at my desk 25 years earlier, but on the other hand–well, is such a drug really a good idea?

It didn’t work out so great for Peter Musik, who ended up losing all of his memories, good, bad, and indifferent.