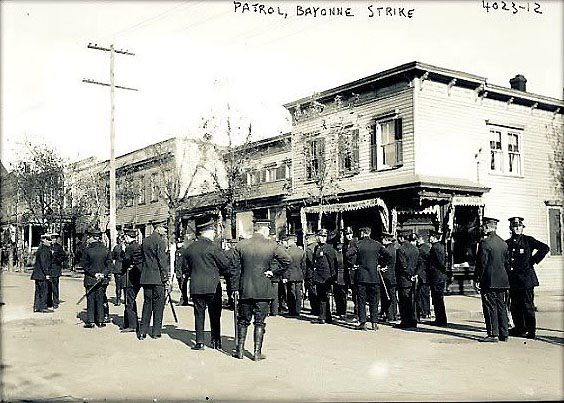 When Olive Ince emerged from her sister’s bedroom, she was amazed to see how many visitors had showed up for baby Tim’s wake in just the last fifteen, twenty minutes. In addition to her mother and Aunt Dotty, at least a dozen people were gathered now in the darkened little parlor (the roller blinds had been drawn), all of them dripping with sweat, fluttering palm fans, and praying the rosary. “…forgive those who trespass against us, and lead us not…” Except for the stout but handsome Father Foye, who’d planted himself boldly like a top-of-the-bill vaudevillian in front of the tiny casket, blocking it from view, everyone was an older woman Olive had known since childhood. Mrs. Meatro, Mrs. Mahon, Miss Cuff, Mrs. Rounds, Mrs. Laudermilch, Mrs. Sharkey, Miss Toomey and her great friend and live-in companion Miss Garlick…

While she’d been sitting at Mary Margaret’s bedside (Olive felt positive her sister was fully awake, although she had not so much as cracked an eyelid), the sexton from St. Mary’s Church, Mr. Byrnes, had arrived in a horse-drawn cart, almost a rarity by then around Bayonne, and carried varnished folding chairs on multiple trips up three long flights and set them out.

“…blessed art thou amongst women, and blessed is the fruit of thy womb, Jesus…”

Olive took one step down the short hall, but stopped. She couldn’t go back in there. This was entirely her fault! It wasn’t! Of course it was! With a black five-decade rosary looped around the fingers of her right hand, Helen Ince glanced up just at that moment and noticed her daughter’s hesitation. She lifted her eyebrows, then lowered them to scowl aggrievedly.

“…for us sinners, now and at the hour of our death, amen. Hail Mary, full of grace, the lord is with thee…”

Olive fled, and even before reaching the street door she’d filled her mouth with two sticks of gum and was chewing at a rapid speed.

Earlier, when she’d told her mother that she meant to go to work this afternoon, Olive had said it primarily to rankle the witch but also to furnish an excuse for slipping away from Mary Margaret’s apartment as soon as possible. She had not really intended to show up at Fleming’s today, especially not after her employer had sent a note (on fine cotton paper stock, naturally, and delivered last evening by one of the store clerks) that conveyed, in the most elegant handwriting, his keenest sympathies for the “horrible trauma” Olive had suffered and offered his heartfelt sorrow at the loss of her “dear sweet nephew.” She should not, the note continued, not under any circumstances, “any” underlined , even consider, “consider” underlined twice, resuming her duties until she was fully recovered from her “atrocious assault.” In a postscript below his florid signature—Harold R. Fleming—he’d added, “You are a peach of a girl and your wages are secure.” Despite the kind but irritating note, and although her nerves were done up, and her left arm had begun throbbing again in its sling, Olive decided now she would, indeed, go to work today and put in as many hours as she could manage.  Fleming’s Books, Stationary and Printing Store was only nine blocks north of where she stood, on the corner of 13th Street and Broadway. Since it would be an extravagance to take a jitney, she set off on foot, blinking against the harsh midday sunshine.

Olive was, of course, aware of the big strike at the Standard works, but considering what had happened in her own life over the past day and a half, she hadn’t paid any attention to it, and it was only because of what she’d overheard Aunt Dotty saying earlier that she knew how violent things suddenly had turned down at the Hook. (Olive was not a regular reader of the daily press, although occasionally she did enjoy perusing the colored Sunday supplements, in particular those sections that described and illustrated current fashions and reported on the private lives of famous stage actresses.) The farther north she walked on Broadway, the fewer people there were on the sidewalks. As she was crossing at 18th Street, she realized that she hadn’t seen another woman in at least three blocks, and that except for one moving van hitched to a team of four horses, the only vehicles that had passed her were police motorcycles and wagons and a steam-powered fire engine. If she’d waited for a jitney, Olive would still be back at 13th Street! She stepped underneath a grocery store awning to get out of the sun for a moment, and then, glancing east down the side street, she noticed little groups of foreign-looking men huddled talking and gesturing behind sawhorses that closed off the entrance to Broadway. What were they doing up here? The strike was down there. With a thrill of apprehension, Olive continued on until, at the corner of 20th Street, a heavyset police officer confronted her. He was holding a shotgun almost tenderly across his chest.

“Missy, this isn’t a good day for your shopping.”

“And where do you work?”

“And what business is that of yours?”

He didn’t reply, just pressed his lips together and beadily squinted. Here was a man, that rare man, unimpressed by Olive’s great good looks, and because of that she was both impressed and intimidated.

He nodded. “What happened to your arm?”

“That won’t be necessary.”

“Be that as it may—I’ll walk you there, missy.”

Despite the high pique she’d deliberately put into her voice and erect bearing, Olive had to admit she was not unhappy for the escort, especially when, scarcely a half-block on, loud angry shouting erupted from East 21st Street. Both she and the policeman instinctively halted and watched four ununiformed detectives lining up strikers against the side of a chemist’s building and searching them roughly for concealed weapons. The shouting, in alien tongues and broken English, came from women and young boys. “Get along there!  Get along down the street!” bellowed one of the detectives. “Go home!”

A Polish woman raised an arm and chopped it through the air. “How can we go home when they at the windows shoot? You must not go near your window—no! The company men will shoot and maybe you die.” The detective wasn’t having any of her malarkey and took a step toward the woman brandishing his pale yellow riot club. She shrank back, all of the women did, but the boys, in caps, white shirts and knickers, did not.

“Stay!” he said and jogged into the street, heading for the next corner.

Olive had no intention of waiting for him—the big fatty!—and she hurried along, unsure now if she’d ever make it to work. Armed policemen and firemen and civilians with freshly printed deputy cards stuck into their hatbands thronged the intersection of Broadway and Twenty-second Street; they filled the street and the sidewalks, but Olive pressed through, saying excuse me, excuse me, and wincing every few seconds whenever she bumped her left arm against someone or the stock of someone’s rifle. Flushed, trembling and breathless, she made it to the lobby entrance to Fleming’s at last, and slumped against the tall plate windows that she herself had dressed with wedding invitations and greeting cards, paper dolls, art supplies, toys, budget books and fancy envelopes tied in ribbons. Mr. Fleming—tall, bald, pale-faced Mr. Fleming—was beside her suddenly, gripping Olive by her right arm, pulling her inside the store, and exclaiming, “Dear girl, what are you doing here? It’s not safe!”

He led Olive over to the cashier’s station (he’d sent the cashier home an hour ago, he said, along with all of the clerks but one, Dick Hembrey, who was built like a stevedore) and then he made her sit down to her catch her breath; over a shoulder he called sharply to Dick, “Get Miss Ince a glass of water!”

“What’s going on, Mr. Fleming?” said Olive looking through the front window, seeing a police captain in a pale gray suit with a checked hat emerge from East 22nd Street, walking in front of a patrol wagon carrying at least a dozen haggard-looking prisoners; policemen and deputies fell in around and behind the wagon as it crossed Broadway heading west toward Avenue C.

“Somebody got killed down there this morning, a kid I hear.”

“Jesus mothering Christ,” said Olive under her breath. Mr. Fleming seemed shocked by her expression, but then soberly nodded his large narrow head. He patted the back of her right hand. “We’re safe here, but I told you not to come in.”

“Yes, thank you for the note, that was very sweet of you. But I—I wanted to.”  She raised her arm in its black sling. “Not that I’ll be much help today, I guess.”

“Don’t worry about that.” He took the glass of water that big Dick Hembrey had finally brought. “We don’t have any customers anyway.”

He was handing the glass to Olive when the front door opened and in walked an Indian wearing a war bonnet and a frontiersman in buckskin, followed by a tall, sunburned, black-haired man dressed in a white summer suit and lugging a movie camera by its tripod. The man looked at Olive and grinned. “There she is, there’s my ugly little Olive,” he said.

He passed off the camera to the frontiersman and opened his arms wide—ta-da! “Told you I’d come back. Say, clumsy, what happened to your arm?”

The only thing close at hand to grab was a damaged and returned copy of Tom Swift and his Electric Runabout, so Olive scooped it up in her right hand and hurled it hard across the store, and since she didn’t in any way throw like a girl, it struck Bill Harrigan square in the forehead. He dropped his arms and frowned. “Damn, Olive, is than any way to greet the man you’re gonna marry?”