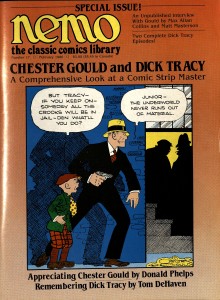 When I was gathering material earlier this year to start up Cafe Pinfold, “Bud, Which Way to the Noble Hotel?” was one of the things I most wanted to include, but I couldn’t find my copy of the magazine. Recently, though, while ambling through the stacks at Special Collections at Virginia Commonwealth University’s Cabell Library in Richmond, I discovered a complete run of Nemos, and Celina Williams and Cindy Jackson, the superbly professional and generous proprietors of Cabell’s comic-art holdings, made and sent me a PDF of my article. I’m delighted to post it here now, alongside of (or actually above) the much-later-written “Heart of Gould.”

Rick Marschall not only published my very first essay about comics, but he was also instrumental in making my Derby Dugan novels possible. Around 1980, I changed literary agents, signing with Harriet Wasserman, who immediately asked me what I intended to work on now that I’d finished Jersey Luck. I was 31 and thought it was time I attempted something  ambitious. So I pitched her an idea that I’d had since graduate school, but was too unsure of my skills to do anything about. I wanted to write a big multi-voiced, multi-generational novel–not one about a single family, as is usually the case, but about a single American comic strip, using that strip and its succession of different cartoonists to trace the arc of the 20th century. I’d write about the strip’s origins in the late 1890s, its heyday in the 1920s and ’30s,  its decline in the 1940s, its cancellation in the1950s, and its rebirth, of sorts, in the 1960s during the era of underground comix.

Even as I was talking it through with Harriet, my stomach was clenching and churning. This all sounded way too ambitious for a writer who, up till then, had written just two relatively short first-person novels, one a horror-fantasy, the other a crime story. But Harriet loved the idea and told me to write up a proposal, which I did, and she promptly sold the idea to Chuck Verrill at Viking. (Those were the days–long gone–when a writer, even a relatively unknown writer like me, could sell a novel and get an advance on the basis of just an outline, or an outline and a sample chapter or two.)  Once I’d signed the contract, I faced the terrifying prospect of having to research and write the damn thing.

I spent nearly a year cranking through microfilm at the New York City Public Library’s Newspaper Annex, and reading every book I could find about cartoonists and newspapers, newspapering and syndication. But while I was getting lots of raw background material, I’d still never met or spoken with an actual working cartoonist, which seemed crazy. This was where Rick Marschall came in.

I don’t recall how I met Rick, or who put me in touch with him, but he was my savior. He’d worked as an editor for newspapers, features syndicates, and comic books, and knew almost everyone in the comics business. He was, and still is, one of the best and most knowledgeable writers about comic strips in America and around the world. He lived then in Weston, Connecticut, and in those years Weston and nearby Westport were home to the largest concentration of successful cartoonists in the United States. After I’d met and told Rick about my project, he answered every question I had, then invited my wife and me to visit him, arranging for us to attend a Sunday afternoon cartoonists’ cocktail party, where I must’ve spoken with and, most importantly, watched and listened to, at least 25 world-famous cartoonists.

That weekend trip to Weston was what finally gave me the courage to sit down and write the novel…which turned into three separate novels published over the span of 16 years. (The opening chapter of the third, Dugan Under Ground, which came out in 2001, is based upon, though highly fictionalized, my vivid recollections of that 1981 cocktail party.)

Rick and I became good friends, despite our diametrically opposite politics (yeah, that kind of thing used to be possible in this country), and our friendship led him to ask me, in 1984, to write an article for Nemo about Chester Gould. To do it, I spoke twice to Gould during the last few months of his life; the article itself was published after Gould’s death.

I haven’t seen or been in touch with Rick Marschall for almost 25 years; while you wish that kind of thing doesn’t happen in your life, it does. But I still consider him my friend, and always will.

(Click on magazine image to read a pdf of the ESSAY)