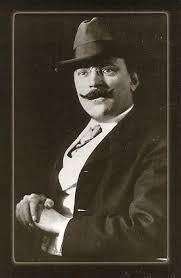 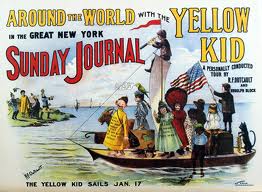 In the early 1980s I began work on a novel about an American comic strip. The story–which my agent had sold on the basis of just an outline–would follow three generations of cartoonists as they wrote and drew or assisted on the writing/drawing of a syndicated strip popular throughout much of the twentieth century. Part One would take place in the 1890s, during the Hearst-Pulitzer newspaper war in New York City. The novel’s first arc would concern itself with a hard-bitten World newspaper sketch artist who creates a comic feature that makes him famous, and with the teenage boy from Hoboken, New Jersey who becomes his studio assistant and then his bitter rival. Part Two would jump to the Great Depression, when the strip, drawn now by the Hoboken boy grown to late middle-age, would change its focus, turning from a Sundays-only slapstick into a seven-days-a-week melodrama. Part Three, with a new cast of characters, would close the story in the 1970s with the retirement of the strip after nearly eighty continuous years.

It was an ambitious project (third novels usually are), but I had no idea just how ambitious until I started researching Part One. Cranking through the microfilm, I fell in love, hard, with New York City and its citizens in the rambunctious late Gilded Age, and that set loose my imagination, as true loves tends to do.

I had not planned–God knows!–on spending so much story time back at the turn of the century. However, after nearly three years of work, the manuscript for Part One alone ran almost six hundred pages–and I had managed to cover only the period from Easter 1895 to Easter 1896. My editor and I decided to postpone Parts Two and Three and publish the first section all by itself, as Funny Papers.

Which brings me, at last, to Richard F. Outcault. For my novel I borrowed some of his professional biography, a bit of his personal one, a few of his quirks (example: his fondness for wearing deerstalker caps), and divvied everything up among a small cast of fictional cartoonists. As a tip of the hat to the actual Outcault, though, I put him into several scenes that took place at the World building in New York City’s Park Row, where almost all of the daily papers of the era had their offices and printing plants. He’s “Dickie” Outcault in Funny Papers; that’s what all the artists and reporters call him–Dickie. I confess, I had no idea whether anybody ever really called him that, but what the heck. It was a nickname I gave him with affections. 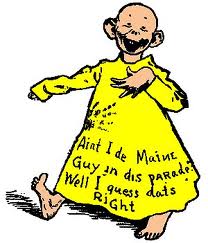 The creator of the Yellow Kid and Buster Brown was a player in his time, and while he was far from being an emblematic figure–he was no Teddy Roosevelt or Stephen Crane–still, he was a significant one. Like those high-school kids from the Detroit projects who invented the Motown sound in the 1960s, Richard Outcault was a modest talent who nonetheless contributed in a major way to modern American popular culture.

And what is especially important–even paradigmatic–about him is not his published work, but rather his recognition, early on, that the real wealth to be generated from comic strips would come from merchandising comic-strip characters. And the merchandising, in turn, would, theoretically, insure the continued healthy existence of the art form. (I’ll bet you, though, that Richard Outcault never called it that.)

As interesting as it may be to us now, Outcault Hogan’s Alley series carries historical weight not because the Yellow Kid was the first successful comic character in America, but because the image and attitude of the bald, jug-eared street arab was so profitably transferred to brands of whiskey and cigarettes, gravy bowls, and porcelain figurines. Because the kid’s grinning, antic face and night shirted figure sold a lot of cheap plates back in 1895, Snoopy sells life insurance in 1995. 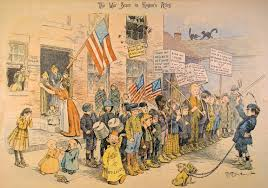 Though Outcault was embarrassed and felt embattled when reformers and preachers and genteel readers accused his Hogan Alley drawings of glorifying slum life, it appears that he enjoyed his sudden celebrity, even flaunted it. Upon the success of the Yellow Kid, first in Pulitzer’s World, later in Hearst’s Journal, he became quite a natty dresser, brandished a walking stick, and started waxing his mustache.

Richard Outcault may have turned a little vain, but he was shrewd, too. At least it has always seemed that way to me.

In 1902, several years after the Yellow Kid faded in popularity, Outcault created Buster Brown–and dressed him in decent retail-store clothing, gave him a pretty mother and a house in the new suburbs. And then he licensed Buster–as well as Tige and Mary Jane–to advertisers and manufacturers. He married newspaper comics forever to the middle-class, which was probably the only way they could have survived, but beyond that, he recognized Americans’ inexhaustible appetite for disposable products emblazoned with familiar cartooned faces. A very shrewd man.

Here’s to you, Dickie.