Jersey Luck was the first of many books (8 and a half) that I wrote between 1979 and 1990 while living in the house my wife Santa and I bought in the Bergen Hill section of Jersey City. According to the “designation report” prepared and published in 1977 by graduate students in the Columbia University School of Architecture and Planning, 83 Summit Avenue is one of a group of six attached Queen Anne style row houses whose facades “make use of a variety of brick and terra-cotta details, brownstone window lintels and sills, and triangular panels above the front parapets. The party wall projects slightly above the first floor and breaks the continuous corbelled arches of the parapet.” The row was built in 1888, and each house was 3 stories and had 2 bays; ours was the only one in the group “to retain its original interior without any subdivisions or architectural changes.”

When we moved in, it was like the third scene in a haunted house movie. The wallpaper (pictures of castles) had to be half a century old, and dried out. Big fronds of it were peeling off the walls, every wall, and the red linoleum was grimy, almost black, brittle, broken in a lot of places. But it had parquet floors, gas fireplaces, green tile mantels, huge mirrors, Tiffany sconces, chandeliers, high ceilings, 11 rooms. Yes, but ancient plumbing and wiring, and windows that could crash at any time.We paid a little under 15 thousand dollars for it. (Not a typo.) And moved in just before my first novel, Freaks’ Amour was published. A few months later our first daughter was born.

The place was a wreck, and a money-suck, and just replacing all of the windows (after one of them actually did crash, during a hurricane) wiped us out. We were white “urban homesteaders.” The still-primarily-black neighborhood saw an influx, beginning in the late 1970s and continuing through the 80s, of white thirtyish lawyers and reporters and cops and artists and musicians and cartoonists and writers and their families, with speculators buying up properties left and right. There were packs of wild dogs that roamed the streets late at night and followed you home, growling, from the fenced-in parking lot where you left your car, and despite that high cyclone fence surrounding the lot you still found your car broken into two, three times a year.

It was loud in the summer, there were always kids outside, it was the boombox era, hydrants were opened, people congregated on the stoops. In the sweltering midnight, one-o’clock-in-the morning heat, you would hear a single basketball bounce and ping over and over and over. Our house stood directly across the street from a large Victorian-looking institutional building–it used to be the city orphan’s asylum but now it was a temple for black Masons. A short distance away, in the blighted “Junction” (so called because it’s where a number of streets, and once upon a time severeal trolley lines, all converged), a beautiful old-time ice cream parlor and home-made candy store (inside, you’d swear it was still the 1890s) remained in business despite the complete desuetude surrounding it. Twice a year Sealtest ice cream filmed its nostalgic TV commercials there.

Although we constantly worked at different house “projects,” I don’t think either one of us, Santa or myself, was at heart much of an urban pioneer. Things always go wrong with an old house, and things always went wrong with ours.We didn’t handle crises especially well. I kept getting bronchitis from inhaling sanded wall plaster. Most rooms didn’t have air conditioning units, we just couldn’t afford them, and in the winter the heat was unreliable, the furnace nerve-wracking; we had a sump pump and if you didn’t hear it going off following a hard rain, you had to go down into the crawlspace, lift a trap door in the back porch and creep down into the spidery crawlspace and check it; otherwise the furnace would flood. I was sure I was going to electrocute myself. We got to know by first name the people who worked at Siperstein’s mammoth paint store, I used the terms “waste stack” and “pilot light” in conversation almost daily. We scraped wallpaper, patched walls, painted rooms, painted floors, fixed up the kitchen, and thus wasted the last years of our golden youth.

Really, I am. The house at 83 Summit Avenue was a big pain in the ass, but having a daughter, then two, living with you in a big old goofy place like that, with all of that insane amount of room, wasn’t an entirely bad thing; it was great for playing hide-and-seek. It was also great for parties, and we had a lot of those–big Thanksgiving dinners with friends and all-day tree-trimmings at Christmastime. (Modesty prevents me from dropping names.) It was a time when most people I knew drank red wine and still smoked. It was the disco era–Saturday Night Fever and “Stayin’ Alive.” The World According to Garp, Didion’s The White Album, Sondheim’s Sweeney Todd; “My Sharona.” The first Christopher Reeves’ Superman movie. Bruce Springsteen. Young Bruce Springsteen. 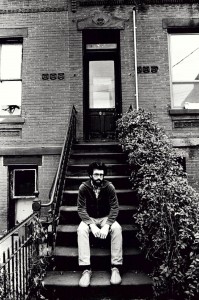 Whenever I had time to write fiction during those years I wrote it in a room at the top of the house with a view of the Statue of Liberty, and the music for the first novel that I wrote there, the soundtrack for Jersey Luck, was definitely Springsteen’s Darkness at the Edge of Town. That was the novel’s soundtrack, but its voice–I’m not sure what inspired that. It seemed authentically mine, though, which I liked. For the narrator’s voice in Freaks’ Amour, I’d done ventriloquism; I’d had to really think about it, and think carefully, before I wrote anything, but for Jersey Luck the voice was just there, clear and distinct. “I grew up in Jersey without knowing any dangerous personalities, no small fry with easy acces to firearms, no berserk dads or brides on dope. That’s because where I came from, towns share firemen, mayors do it part-time, and a new family restaurant featuring a clown on Tuesdays is front-page news with a picture, and so is any local kid who can spell perfectly. Jesus. I had good skin, good school, art class, and chino pants, never an arrest. Jesus Christ. Neighbors liked me, nuns did too, nobody died, and grandmothers bowled on leagues.” Yeah. That was my voice. Maybe for the first time.

It was a hard-luck novel, though, which was only apt. I was kind of asking for it, no? Writing a novel called Jersey Luck and having the explanation of the term be “no luck at all.” It never got reviewed anywhere, that book, and quickly disappeared.

With Jersey Luck I’d tried to write something completely different from my first novel. I wanted to write a semi-comic crime novel about young love and young lust, a Darkness album of my own, and a Jersey movie in snappy prose, which is why the Turnpike features in it so prominently, and Atlantic City. I was also conscious throughout of wanting to “nail” this specific moment in American time; conscious, pretentiously, that if someone found it in a library 25 (or 33!) years from “now,” it would be an authentic glimpse of a previous time. That’s the reason for the songs, the products, the radio contest, and all the rest of it.

The novel got started as a short story called “Peek & Neetsie” that I nepotistically sold to the digest-size magazine I was assistant-editing in the late 1970s, a lowseller called Pillow Talk, another Penthouse Forum rip-off. I don’t remember much about the original story (I don’t have a copy), just that the characters were the same as in the novel, but I think they did different things; it was the same set-up, though: she was married and he wasn’t. Because I was living on Summit Avenue, Jersey City, I made my guy, the narrator Jacky Peek, live there as well in the novel. (Later, I had my girl group singer/ narrator in “He’s All Mine” (in Sunburn Lake) live there; Grace Penny, the schoolteacher in Green Candles, did as well.) It took me about six months to write, and a lot of the dialog is verbatim, stuff I heard on city buses going to and from the Path station at Journal Square, and in playgrounds with my daughters. I was particular, finicky, that I got vernacular right.

I wrote the book, writing/typing it on a heavy Olympia office typewriter, during the waning days of the Carter Administration, the time of the hostage crisis in Tehran, the rise of Reaganism, and it was published completely without fanfare. From my vantage it seemed published almost with regret. The acquiring editor had left in mid-production; the editor who’d inherited the book loathed it and me: the year after the novel flopped, she sent me a Christmas card with St. Sebastian on it–you know St. Sebastian, the early Christian saint who’s always portrayed tied to a tree and being shot with arrows? Inside was a note she’d written that said something like “I hope next year is better!” Thank you. Thank you very much.

Jersey Luck is a “small” novel, but deliberately so. Like the “small” (meaning under 50 million dollars) movie, the “small” novel is, unfortunately, an endangered species. It was optioned twice, and in the mid/late 1980s I wrote a script based on it (you can find that elsewhere on the blog, in FILM), although the script bore small resemblance to the novel. The bank robbery figures a lot more prominently in the script.

Maybe I should’ve done it that way in the novel. But I still think it would’ve been a doomed book. With that title? Sucker didn’t stand a chance.